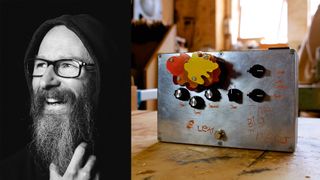 1. What was the first pedal you built and how did the design come about?

“The first pedal that Audio Kitchen released was The Big Trees [Class A valve amp/preamp pedal]. I’d made the Little Chopper amp and at that point people were saying, ‘It’s great for the studio, but I need something really loud to play live with.’

"I thought it would be really cool if you could have an amp to use in the studio that you could also use as a pedal and just plug into another [louder] amp when you wanted to go and play live.

“I came up with this idea and it took about three years to get it out there. I had a strong gut feeling when it was finished; I knew it was done and it was as good as I could possibly make it... Incidentally, the name is a homage to Lovetone’s Big Cheese [fuzz], which I think is the coolest pedal ever.”

2. What do you think makes Audio Kitchen pedals unique?

“Looking back at the things I’ve designed over the years, I think it’s about having a relatively unmolested transient in the note. When people play through my pedals, they say they can hear the instrument and the person who’s playing it. In other words, the pedals don’t impose their own sound - they’re transparent. Even when they’re face-meltingly broken up, you can hear the person who’s playing and the instrument they’re playing.”

3. What’s your best-selling pedal and why do you think that is?

5. Tell us a secret about effects that you’ve discovered...

“Get a box you can use for A/B’ing stuff, so you can swap between two different things and blind-test sounds. Analyzing things without knowing what you’re listening to can open up your mind to experimenting more and expand your palette.”

“Using too much distortion/break-up is something you can hide behind. When you dial it back a bit, or have a clean component of your signal, it forces you to up your game. It’s like recording: you’ve got to get better. That doesn’t necessarily mean technically better - it’s more about conveying what you want to convey. It’s about decreasing the friction between your brain and what comes out of the speaker.”

“I think the Chase Bliss Audio and Stone Deaf idea of digitally controlled analogue pedals is awesome. The technology is there and I’d love to see more being explored down that path. You could potentially have a Tube Screamer with presets. Wouldn’t that be cool?”

8 What’s your favorite vintage pedal and why?

“I admire the inventor of the Tube Screamer [Susumu Tamura] because he made something that worked very well and was eminently mod-able. People have built careers on selling modded Tube Screamers before going on to do other really cool stuff. It got so many people into building pedals who may not have otherwise done so.”

9. If you had a three-pedal ‘desert island’ pedalboard what would be on it and why?

10. What are your favorite effects pedal moments to be heard on record and why?

“The first thing that comes to mind is Jonny Greenwood’s Paranoid Android solo [from Radiohead’s OK Computer album], which is just mental. It’s an amazing leftfield solo using the [Mutronics] Mutator. I also really love the iconic stuff that Russell [Lissack] from Bloc Party did on his first few records. The way he combined effects was so interesting and much copied afterwards. Most of his pedalboard was Boss.”