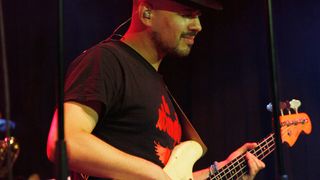 Tell us about the Sound Of London Collective, Stuart.

"The project originally started with Ollie Clarke and James Larter. James is an amazing percussionist from the Royal Academy School; he’s an amazing musician. Ollie is a virtuoso guitarist, and they’re both really meticulous and great composers. I’ve written two tracks, one called Aquilar and Soulmate, and also co-produced them.

"It was a cool project to work on, as it’s nice to get involved with putting some music out there and get involved in music that has more of a classical element. The album, Reveries, is out now, and it’s amazing."

It sounds like a bit of a change from your previous work.

"Well, I love world and Latin music, but a lot of this stuff was bordering on classical, which I love but which I’m not familiar with. It was suggested that I go and learn some Bach on the bass, so I’m going to do that. Just exercises, really.

"But it’s all about the musicians you’re with, and the mindset that you have when you’re playing. For example, I remember playing a bass part with Mark Ronson in rehearsal, and actually falling asleep while playing it. Genuinely, falling asleep, or mostly asleep anyway.

"There’s a lot to be said about playing music when you’re in that state between consciousness and unconsciousness. You’re free to make mistakes, and to go into different directions. I remember recording Just Can’t Stop with Jamiroquai and it felt as though the bass was flowing into me and out of my fingers - it was something out of this world."

How has your bass playing changed over the years?

"I do find that my bass playing has progressed from the early Jamiroquai days, especially the finger work. It’s a lot faster. It was a challenge, and being around highly talented musicians always makes you step your game up.

"You need to exercise those muscles, especially in the age of YouTube musicians in their bedroom playing with such brilliance. I saw an interview with Brian Eno who said that there was something special that occurs between a group of musicians that makes it work."

Name a bassist that we should check out.

"I’m a big fan of Tetsuo Sakurai of Casiopeia, the Japanese fusion band. As a kid I studied Mark King’s slap technique and liked it, but Tetsuo’s style was a little different and really impressed me. Obviously I admired Larry Graham as well, and I’ve become friends with him; he was the original, and he’s come through some dark times.

"As you progress, you develop your style and you become your own musician, but you never stop admiring the people who influenced you. I saw Level 42 in a live video, and the way he sang, and played, and danced, and had those LEDs all up the bass neck, I thought was dope. I’ve never really worked on doing all these things - I need to put some practice in."

What else is happening?

"There’s a lot going on. I was in South Korea this year on a project, and I’ve also been doing things with the guys from Incognito. I’m also working on my own record - and I’ll have some pretty amazing gear news to announce soon. Stay tuned!"

Sound of London Collective's Reveries is out now.