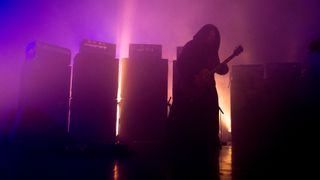 “It’s not violent, actually. It might be kind of aggressive because you’re in this sound field, but it’s not a violent, destructive thing. It’s an expressive thing.”

That’s Sunn O)))’s Stephen O’Malley on the misconception that he and sonic life partner Greg Anderson are maliciously looking to destroy audiences with their body of extended, speaker-and-ceiling-cracking drone experiments.

In fact, 20 years into one of heavy music’s most unlikely success stories, the robe-donning duo are in the mood to celebrate. While their Life Metal is ostensibly rooted in the murkiest corners of metal - pulling inspiration from the slow-mo crush of early Melvins and Grief, as well as godfather of gloom Tony Iommi - the guitarists’ latest occasionally comes across as jubilant as its uplifting title.

Take Novae, the double album’s 25-minute finale, where the pair gleefully bowl into a series of mountain-leveling power chords before allowing each other to venture off into their own textural journeys.

“One of the names we’ve given it is ‘the riff exchange program’,” says Anderson of the benevolent back and forth he maintains with O’Malley. “One person [plays] a solo - which, in the traditional sense, is nothing like a John McLaughlin or Eddie Van Halen solo, of course. It’s solo riffing that’s improvised. Once that finishes, there’s a unison riff, and then the next player starts [his solo section].”

Sunn O))) [pronounced “sun”] have been feeling extra-generous. Across Life Metal’s four epic compositions, O’Malley and Anderson unveil a breadth of riches, from the deep power surge of inverted bends and pipe organ that caps Troubled Air to the medieval, meditative harmonies of Between Sleipnir’s Breaths, an ode to a mythological horse.

The pair have also just unveiled Pyroclasts, a sister set to Life Metal containing a series of fully improvised pieces that arose from a series of studio warmup exercises. While some Sunn O))) records have taken years to complete, both Life Metal and Pyroclasts were cut with esteemed audio engineer Steve Albini (Nirvana, Shellac) at Chicago’s Electrical Audio facility in just two weeks.

Decades of working together have transformed Anderson and O’Malley into a naturally intuitive duo, but the group also credit their current focus to Albini’s get-it-done-in-the-moment recording methodology.

“Producers we worked with in the past [would say], ‘Hey if you make a mistake, don’t worry about it. We’ll fix that. We’ll fix it five different times!” Anderson says. “With Albini, that wasn’t the case at all. You felt like you really had to bring your best self to the recording session.”

After mastering their tone in the studio, the band and EarthQuaker Devices teamed up to recreate Life Metal’s fuzz-forward feel with a signature stompbox - dubbed, of course, the Life Pedal.

An octave fuzz blending the nasty appeal of a classic RAT with Seventies-era Shin-Ei distortion, the Life Pedal was built for those looking to blissfully blast themselves into oblivion like the kings of drone. The pedal is also a more satisfying anniversary gift to each other than a set of fine china.

“The idea to work with Albini and the idea do this Life Pedal came out of us trying to think of ways we could celebrate surviving 20 years as a band,” O’Malley says. “Those were our gifts to ourselves, in a way. I think they were great ones!”