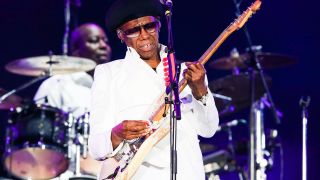 Rock guitarists with open minds discovered that a lot of really cool, inventive electric guitar parts were predominant in disco hits during the '70s, including Ish Ledesma’s stanky talk box on Foxy’s Get Off, Jerome Smith’s half-speed, octave-up leads on KC and the Sunshine Band’s Get Down Tonight and Jeff Baxter’s razor-sharp solo on Donna Summer’s Hot Stuff.

But the most classic and timeless guitar parts to come from that era were laid down by Nile Rodgers, whose driving rhythms propelled numerous hits by Chic and Sister Sledge like Good Times (which originated the seminal hip-hop sampled loop), We Are Family and the best-selling hit Le Freak.

While hundreds of rock, new wave, R&B and hip-hop guitarists have copped Rodgers’ licks over the last four decades, few have come close to duplicating his slinky, sexy tones.

The secret behind Rodgers’ ultra-clean sound is that he either records his guitar direct into the studio’s mixing console or he employs a combination of direct guitar and a miked amp, as he did on Le Freak.

Recorded at New York’s Power Station Studios with engineer extraordinaire Bob Clearmountain behind the studio’s Neve 8068 console, Rodgers’ direct recorded rhythm guitar track emphasizes upper midrange and treble frequencies beyond the range of a standard guitar amp to find its own distinct space in the mix.

Rodgers’ Hitmaker Strat, which he says sounds unlike any other Strat he’s ever played, also contributes to the guitar tone’s distinctive mojo. But perhaps most important of all is Rodgers’ unique timing and feel, making extensive use of muted-string chucking and chord voicing limited to three strings at most.

TONE TIP: The UA Arrow is bundled with the Pultec EQP 1A3 EQ plug-in, so with the Neve plug-ins a virtual duplicate of Rodgers’ complete vintage direct recording studio setup is available for less than $1,000. Use the 31102 EQ to boost frequencies above 4kHz to replicate his ethereal rhythm guitar sheen.