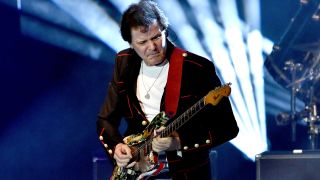 The union of four previous members of Yes (Jon Anderson, Chris Squire, Alan White and Tony Kaye), producer Trevor Horn (who also was a member of Yes) and up-and-coming South African solo artist Trevor Rabin proved to be a whole greater than the sum of its parts.

This was confirmed by Owner of a Lonely Heart, which became the band’s first and only Number One hit in January 1984.

While Rabin deserves the bulk of the credit for the song’s composition, Anderson’s vocals, Squire’s Motown-inspired bridge and Horn’s sample-heavy production tricks also contributed significantly to the song’s appeal.

While sampled orchestra hits, funk horn blasts and breakbeats provided much of the song’s ephemeral ear candy, Owner of a Lonely Heart is actually a very guitar-heavy song, with well more than a dozen individual guitar tracks, overdubs, layers and fills expertly laid down by Rabin in the studio playing prominent roles in various sections.

That means there’s too much ground to cover here, so I’m going to provide full details for Rabin’s stunning solo and give "Cliffs Notes” for the remainder.

Although the solo sounds like a guitar synth, it’s actually a deft combination of a distorted lead tone doubled with a separate signal processed by a pitch transposer set a fifth above the original pitch.

Rabin’s main guitar was a 1962 Fender Stratocaster with rosewood fretboard, DiMarzio FS-1 pickup at the bridge and stock Fender pickups at the neck and middle (the Seymour Duncan Hot Rails/bridge, Bill Lawrence L250/middle and Seymour Duncan Hot Stack/neck configuration currently on that guitar first appeared later during the summer of 1984).

Rabin split the Strat’s signal (which was boosted by a Boss DS-1 Distortion placed before the splitter) to a pair of 100-watt Marshall 2203 half stacks with the 4x12 cabinets facing each other and placed about a foot apart, with separate dynamic mics on each cabinet.

Set the PS-6 to Pitch Shifter mode, dial in the +7 Shift setting and adjust the Balance to 5 (12 o’clock) so the straight guitar and pitch shifted signals are equally balanced in the mix.

One head amplified the straight guitar tone, while the other was processed with an MXR Pitch Transposer with its mix control dialed fully wet (effect 100 percent of the mix). Compression and reverb were inserted into the signal via the mixing board.

Other key guitar tracks include the distorted intro riff (processed with the DS-1 and boosted treble/upper midrange, scooped lower midrange, compression and reverb on the board) that instantly switches to a dry distorted tone with narrow midrange boosted around 2kHz on the mixer’s EQ.

There's also a clean arpeggiated part played during the verses and immediately after the solo (played on the Strat’s bridge/middle setting with an MXR Dyna Comp, Boss CE-2 Chorus and about 250ms delay set to a single repeat with 30 percent delay level) and a funky clean-tone two-note octave rhythm during the bridge, along with a clean Telecaster doubling the bass lines throughout the song.

Horn said in a 2019 video that Rabin played a Rickenbacker 12-string for the arpeggiated part during the verses, but with all due respect to Mr. Horn, that sound is clearly a Strat (it’s almost identical to Andy Summers’ tones recorded for the Police with a very similar Strat/Dyna Comp/modulation/Marshall rig).

The 12-string was most likely used for the chime-like accent and atmospheric fills (heard immediately after “lonely heart” and doubled by keyboards) during the chorus.