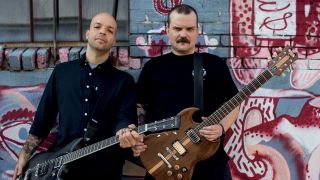 “We’ve had a few different guitar players come in. I look over there, and it’s Jon this time,” Torche vocalist/guitarist Steve Brooks says - in his matter-of-fact way - about seeing founding bass player Jonathan Nuñez on the other side of a six-string whenever they hit the stage.

Lineup changes are business as usual for the Miami-formed foursome, but Brooks admits this latest shift has led to the occasional memory lapse: “I’ve got to stop saying he’s my bass player.”

While Torche’s latest mud-stomping opus, Admission, is the quartet’s first since Nuñez took over guitar duties from Andrew Elstner in 2017, to say this is a new role for the musician would be misleading.

Along with contributing brutal, but surprisingly pop-conscious low-end fuzz since forming the project with Brooks and drummer Rick Smith in 2004, Nuñez has always been dialing in additional guitar sonics behind the scenes as the group’s in-house producer.

“To be quite honest, I’ve played guitar on pretty much all the records,” Nuñez confirms, “whether it’s a lick or a little passage that needed something - some ambient stuff, an effect. Even on the last one [2015’s Restarter], I played a solo.”

Nuñez is admittedly more interested in textural soundscaping than shred-worthy moments but has naturally added more leads to the group’s fifth full-length. Slide, written by new bassist Eric Hernandez, sounds as if Led Zeppelin’s The Ocean were thrown off of a Miami boardwalk and plunged into the deepest recesses of the city’s sludge scene.

Despite this, Nuñez manages to laser-beam some choice bends and scale work out of the mire, all the while avoiding anything too bluesy (“It’s OK listening to music that has [blues-based leads], but playing it makes me feel weird; I’m not into that”).

Though most of Admission is united through the detuned gut-rumble of Brooks and Nuñez’s go-to, drop-A tuning - as well as the crisp and punchy tones produced by the latter’s line of handcrafted amps and pedals - the album pushes Torche toward varying extremes.

Its triumphant, arena-ready title cut is especially melodic and approachable, enveloping shoegaze-influenced dips and dives around a rhythm inspired by a pre-programmed dance music beat Nuñez found on a drum app during the demo phase.

Submission, meanwhile, is a wickedly efficient two-note slam, Brooks conceding that the single-riff approach was inspired by the cyclical fury of post-punks Brainbombs and Flipper.

15 years into their career, Torche are setting expectations ablaze and reveling in the sounds of what is their poppiest and most discordant collection yet. “We’re kind of veering off in different territories - that’s all I can really say,” Brooks says humbly. “We kind of still write the way that we [did], [but] this record, I think it’s our best record, to be honest.”