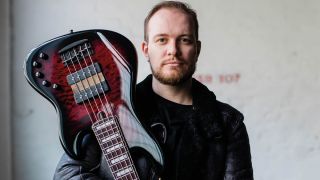 Voyager was first founded in 1999, two years before I had even started learning how to play bass. It wasn’t until 2007 that I was finally accepted into the band, and our seventh album, Colours In The Sun, is out now on Season Of Mist.

Our future plans include promoting the album, probably lots of paperwork, some touring... Oh yes, and then, taking over the world! I first got into playing bass when the allure of jamming with my mates in their band was too sweet to ignore.

As it was 2001, the plan was to be that awesome DJ scratching away frantically on a turntable over heavy guitar riffs. However, I didn’t own a turntable and, quite frankly, knew absolutely nothing about being a DJ, so, I got my dad’s old basses out and started chipping away, eventually joining my mates in the jam room.

My first bass was an Ibanez BTB 400QM in transparent black. I still have it!. I’m endorsed by the fine folks at Mayones guitars in Poland, who make incredible basses. I use Ernie Ball strings for that punchy tone and I predominantly play five-string basses. I love having the ability to get to get from low B to low A, and even on one of our latest singles, Brightstar, a low G. I’d love to have a six-string one day.

I love slapping the bass. Have I ever been accused of slapping the bass too much? Maybe, but slap is too much fun not to play almost all the time, however unnecessary it may be. You need to find the perfect mix of playing with conviction, having your basslines practiced well enough for you to feel confident playing them, and being relaxed in your hands and wrists so you’re not fighting the instrument.

My favorite bass to date is my Mayones Jabba Special HH five-string. It’s really road-worn, it’s seen a lot of gigs and it has travelled the world with me. It’s got an amazing tone that pockets really well with bands in live situations. If I could get the bass tone of any album ever released, I would choose Etienne Mbappe’s Misiya or Dan Roberts’ tone on the Crash Test Dummies album God Shuffled His Feet. Can I have both?

Voyager's Colours in the Sun is out now via Season of Mist.