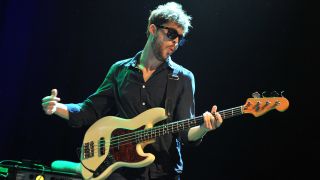 Since age eight, when his father aspired to create a good old-fashioned family band, Joe Dart has always had a bass in his hands. Although his sibling collaboration never took off, Dart fell in love with the instrument and grew up replicating the likes of Flea, Pino Palladino, Bernard Edwards, and the left hand of Stevie Wonder in various bands around Harbor Springs, Michigan.

After thriving in his high school jazz ensemble, Dart had the opportunity to attend Berklee College of Music, which he turned down to stay closer to home and study music at Michigan University. That turned out to be the best decision of his life, as it led him to meet his best friends and Vulpeck bandmates Jack Stratton, Theo Katzman, and Woody Goss.

The funky quartet assembled in an effort to pay homage to the great rhythm sections of the past and to create music with a groove-first focus for the masses. Thanks to their strong online presence and high-energy shows, they’ve accomplished all of that and more—so much so that when the band plays its song “Dean Town” live, it’s not unusual for the crowd to sing Dart’s difficult bass lines along with him note-for-note.

And on the outfit’s latest album, The Beautiful Game, Dart solidifies himself as one of the most exciting young players to emerge, thanks to his tasteful chops, funky grooves, rapid finger work, and unbelievable pocket.

Vulfpeck is known for impromptu writing and recording sessions. Is that how this album came together?

The way we make our albums is we meet in someone’s living room or porch, someone plays an idea, and we join in and run with it. Within five or ten minutes of playing, the record button gets hit, and then we lay it down a couple of times. We intentionally keep things on edge and in the moment. There’s no sending around demos, no writing anything down, no month-long compositions. That keeps things improvisational. On all of the Vulfpeck records, you’re hearing one of the first times we’ve ever played those songs.

You get a great bass tone. What exactly were you going for on the record?

It needs to be punchy, and I like midrange growl and a bit of bite. There’s a sweet spot between being really deep and packing a punch. My favorite bass tone is Bernard Edwards’ on the Chic records; something about that midrange tone is so satisfying to the ear and so funky. My favorite pure-tone player is Pino. When I’m recording, I’m always thinking, “What would Pino do here?”

“Dean Town” has become a fan favorite. How tricky is it to keep up those 16th-notes?

It forces me to keep my chops up, which is good. I feel most in shape after we’ve been touring for a while, and we had been when we recorded it. But when we play it live, it’s a bit of mind-over-matter thing where I’m trying not to think about how long I have to play those 16th-notes. And it’s completely surreal when the crowd sings along. It speaks to the Vulf fan base’s musical aptitude that they can sing every note of such a tricky part that I’m barely hanging onto.

What are you focusing on in your playing lately?

I’ve worked up some speed, dexterity, and stamina, and when I’m playing I’m mostly thinking about time and groove at this point. When people ask what’s an important rudiment of practice, I always say it’s time. I try to think like a drummer when I’m playing. As a bass player I feel a certain responsibility, because while other instruments are able to stop and start, the bass has to keep going. When the bass stops, you notice. So I go out there with a big sense of duty to hold it down. My job is to groove and lay down the foundation for the rest of the band, and I love that.