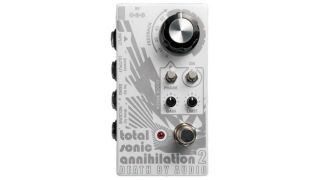 Death by Audio has unveiled the Total Sonic Annihilation 2, an update on their first-ever pedal.

The original Total Sonic Annihilation, which the Brooklyn-based company conceived as “the most insane pedal of all time,” functioned by feeding the other pedals in a chain through its effect loop and then back into themselves, creating wild and often abrasive feedback sounds.

The new TSA2 adds in an active boost, a phase switch and a limiter, as well as, in DBA's words, a “boatload of gain.”

The Total Sonic Annihilation 2 is selling for $250. For more information or to purchase, head over to DeathByAudio.com.