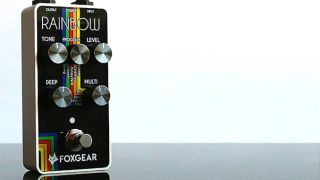 Foxgear has announced the new Rainbow Reverb, a digital unit that is based on the DSP FV-1.

The new pedal offers five reverb presets that include two shimmering algorithms, two classic reverb effects and a “RotaryVerb,” which the company describes as “putting an old rotary speaker right in the middle of the Pantheon temple in Rome.”

The Rainbow boasts a central selector knob that works in synergy with a Multi control. There are also Tone, Deep and Level knobs, as well as true bypass switching.

The Rainbow is available now for $129.