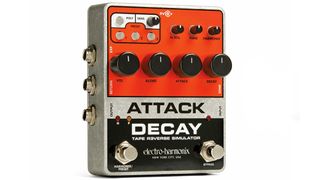 Electro-Harmonix has finally brought back the coveted Attack Decay pedal originally produced in very small quantities from 1980-81, but rather than releasing a throwback reissue they’ve done a dramatic reboot that significantly expands upon the capabilities of the original.

In addition to the original tape reverse simulator and automatic volume swell effects, the new Attack Decay pedal provides three selectable attack and decay shapes in mono mode, a highly expressive poly mode, a digital fuzz circuit with a complete set of controls, triggered tremolo effects, an effects loop, three preset memory locations and much more. Best of all, the new version adds about 10 times more power at a street price that’s about one tenth of the original pedal’s price on the vintage market.

With four knobs for the main Attack Decay parameters (Volume, Blend, Attack and Decay), three mini knobs for the Harmonix fuzz (Harmonix Volume, Tone and Harmonix), a mini Sensitivity knob, three preset pushbuttons and a Poly mode pushbutton, the Attack Decay pedal looks deceptively simple. However, numerous custom settings and functions are accessible by holding down different combinations of the pushbuttons and/or footswitches (Harmonix/Preset and Bypass) so it’s important to read the manual to get the most out of the box.

In addition to ¼-inch input and output jacks, the pedal also provides ¼-inch send and return jacks and a ¼-inch expression pedal jack. The Attack Decay operates via an included 9-volt power supply only (no battery power option).

While the Attack Decay pedal produces truly awesome tape reverse effects that are extremely easy to control in live performance, this effect is just the tip of the iceberg. I found the automatic volume swells even more useful (a la Cathedral and Since We’ve Ended as Lovers) and loved using poly mode for authentic pedal steel-style effects. Dialing in a fast attack with short decay produces staccato sounds that can sound like a banjo, koto, or synth, and the triggered tremolo generates inspiring rhythmic effects.

The Harmonix digital fuzz circuit is worth the pedal’s surprisingly affordable price all on its own, and thanks to the Attack Decay’s three presets you could use it as a standalone fuzz in addition to two other effects, saving space on your pedalboard. Patching various effects into the pedal’s effect loop significantly expands its creative capabilities, but even without taking advantage of this feature the Attack Decay provides an impressive wealth of highly inspiring effects to stimulate your creativity.

• Mono mode provides selectable linear, parabolic and S envelope curves for the attack and decay individually for an even wider range of textures.

• The three preset buttons enables users to save three radically different effects and access them instantly.