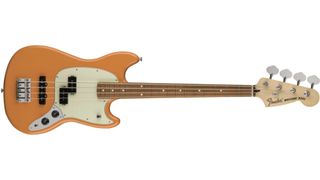 There’s no doubt that short-scale basses are en vogue. Maybe it’s just another manifestation of the cyclical nature of trends, or perhaps it’s a reflection of a more broadly embracing and eclectic spirit in modern music, but short-scale basses with their unique harmonic response, rubber-bandy feel and easy playability are all the rage.

Fender introduced the Mustang bass in 1964, and while it never enjoyed the prominence of its genre-defining Precision and Jazz cousins, it always had a passionate fan base. Recognizing the emergent short-scale trend - and with a legendary short-scale in the company’s legacy arsenal - Fender smartly decided to update and reintroduce the Mustang for a new generation of players.

While some short-scales feel like they get short shrift in terms of parts and general attention to detail, Fender took a different approach with its new Mustang. It’s a serious instrument with the hardware and fit-and-finish one would expect of any pro-level bass.

Unlike the original, with its single P-like split-coil pickup, the new Mustang incorporates full-size P and J pickups and a three-position switch, with controls limited to volume and tone. Other smart little details abound, like the engraved neck plate, pau ferro fingerboard and four-saddle hardtail bridge for precise intonation and good, resonant transfer into the body.

No doubt recognizing the short-scale’s hipster cred, Fender offers the Mustang PJ in a quartet of groovy colors: Capri Orange, Olympic White, Sonic Blue and Torino Red. I got a ton of compliments on my Capri Orange tester, and every bass-playing friend who picked it up was all smiles when recalling how easy and fun it is to get around on a short-scale.

The bass sounds fantastic, and the addition of a J pickup in the bridge position adds a ton of sonic flexibility. It doesn’t have the harmonic color of a full-scale bass, and that’s part of its charm. My tester could easily go from dark and dubby with the neck pickup soloed to throaty and midrange-y with the J favored. With both pickups engaged, the tone is round and fat, but with a quirky hollowness in the low mids that’s a familiar part of the short-scale sound. It’s also a great bass to try with flatwounds, as its reduced harmonic vibrancy makes it capable of extremely subby low sounds.

If you’ve been on the fence about adding a short-scale to your arsenal, the Mustang PJ should be a great piece of evidence that it’s worth pulling the trigger. It isn’t a one-trick pony, and its singular sonic signature would be a healthy addition to any collection of more conventional instruments.

Street: $574
Pros: A superb modern update on a short-scale classic
Cons: None
Bottom Line: Bass players in the know are well aware of the charms of a short-scale. With the Mustang PJ, Fender now has a must-see.