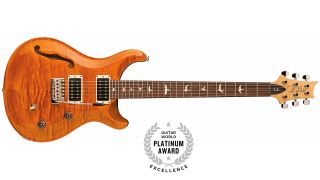 One of the most underrated guitar designs ever invented, the semi-hollow electric deserves a prominent role in every guitaristŌĆÖs gear arsenal. ThereŌĆÖs a sort of just-right ŌĆ£GoldilocksŌĆØ effect that the combination of a solid center block of wood surrounded by resonant chambers imbues upon the instrumentŌĆÖs tone, making key midrange frequencies more prominent and resonant, taming highs and delivering expanded dynamic range and expressive response. A good semi-hollow axe can provide acoustic-like liveliness when played clean, but it can also produce extremely massive, rich tones with distortion, making it one of the most versatile electric guitar designs ever conceived.

By pairing the bolt-on neck construction of its CE models with a semi-hollow body, PRS has developed an extremely enticing variation of the classic semi-hollow guitar. The new PRS CE 24 Semi-Hollow has a very distinct tonal character thatŌĆÖs brighter and livelier than most dual-humbucker semi-hollow guitars, which for many players is a very good thing indeed. With its classic PRS styling, itŌĆÖs a ŌĆ£wolf in sheepŌĆÖs clothingŌĆØ that can be surprisingly aggressive when you want it to be.

FEATURES The main magic behind the PRS CE 24 Semi-Hollow is its combination of maple and mahogany tone woods, which provides an impressive balance of brightness, warmth, percussive attack and full-bodied sustain. The 24-fret bolt-on neck is maple with an East Indian rosewood fretboard with traditional PRS Birds inlays, and the body is constructed from a generously hollowed out mahogany back and figured maple top and with a single f-hole on the bass bout.

The neckŌĆÖs Pattern Thin profile and satin nitro finish offer exceptional playability and comfort, and its 25-inch scale length maintains an ideal balance between the higher tension ŌĆ£twangŌĆØ of a longer scale and the more comfortable ŌĆ£slinkyŌĆØ feel of a shorter scale. The hollowed-out-chamber body construction provides a solid base for the PRS Patented Tremolo - an uncommon feature for a semi-hollow guitar that greatly increases this modelŌĆÖs versatility. PRS Low Mass Locking tuners secure the strings solidly, enabling players to use the tremolo liberally and stay in tune without needing a locking nut. The pickups are a pair of PRS 85/15 humbuckers, and controls consist of a three-position pickup toggle switch, master volume knob and master tone knob with a push/pull function that engages coil splitting.

PERFORMANCE Comparing the tone of the PRS CE 24 Semi-Hollow to other mahogany body/maple top guitars is like comparing 4K video to HD. Both are quite good, but the CE 24 Semi-Hollow delivers notably more detail and more of what you want to hear. The treble is brilliant, but surprisingly full-bodied instead of harsh or piercing, perfectly complemented by rich, voice-like midrange and tight, yet satisfyingly ample bass. When played through an amp dialed to a clean setting, the tone is vibrant and punchy, and when the distortion is cranked up, the tone becomes impressively fierce and bold with a presence that makes itself known. This is the sound that so many hot-rod guitars strived for in the Eighties but few, if any, achieved.

The coil splitting function delivers true single-coil character with brilliant zing and crisp attack, but even here the overall body is full and complex with an alluring resonance that adds so much more. The guitarŌĆÖs tone control circuit is perfectly dialed in so every setting sounds great, with the full backed-down setting providing thick Clapton-esque tone on the neck pickup and ŌĆ£half-cockedŌĆØ wah-like tones on both pickups or just the bridge pickup. With its fast-playing neck and ultra-reliable tremolo system, the CE 24 Semi-Hollow can shred as capably as it can shine at more traditional styles, including blues, country and jazz.

Delivering an impressive balance of brilliance, clarity, body and breadth, the PRS CE 24 Semi-Hollow is an incredibly responsive, dynamic electric that can sound surprisingly fierce, yet satisfyingly familiar.