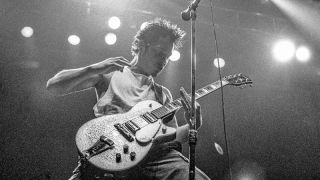 Soundgarden lead guitarist Kim Thayil once called Black Hole Sun the band’s Dream On, but this brooding, psychedelic rocker is no ordinary power ballad. Composed by the band’s frontman, Chris Cornell, the song uses 11 of the 12 notes in the chromatic scale in a highly effective manner that makes perfect melodic sense without any dissonance.

Contrasting guitar textures - upper-register arpeggios with warbling rotating speaker vibrato on the verses and heavy, overdriven lines and power chords on the choruses - reinforce the composition’s drama and tension without relying on the obvious “soft/loud” approach often overused by Soundgarden’s grunge counterparts.

One lesser-known detail of Soundgarden’s Superunknown album is that Cornell recorded almost all of the rhythm guitar parts himself while Thayil’s role was exclusively devoted to playing lead. According to producer Michael Beinhorn, Cornell used only three guitars: a Gretsch Duo Jet, a double-cutaway Gretsch Silver Jet and a Fender Jazzmaster, with the Duo Jet being his sole instrument for Black Hole Sun.

Most of Cornell’s guitar tracks were recorded using a Marshall JMP 50 half stack and Mesa-Boogie Dual Rectifier Solo half stack blended together. On Black Hole Sun, the Marshall provided brighter tone with defined string attack, while the Mesa delivered darker tone with bigger body and bottom-end girth, and both amps were set to moderate levels of overdrive.

The song’s most distinguishing tonal characteristic is the warbling vibrato on the verse’s guitar part, which was created using a Leslie Model 16 rotating speaker cabinet driven by the Marshall head. The rotating speaker effect gives what would otherwise be a sparse- and small-sounding part plenty of texture and body to fill the sonic space and engage the ear, and it enhances the trippy mood of Cornell’s cryptic lyrics.

TONE TIP: Use the CE-2W’s vibrato setting (far right) with the Rate and Depth controls each set to 7-8 to duplicate the Leslie’s distinctive warble.