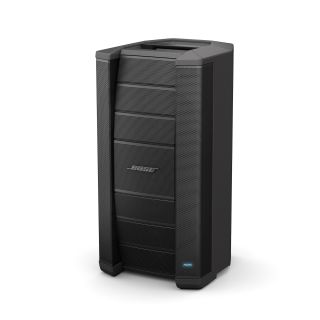 Guitarists are absolutely crazy about the details of their gear—arguably more so than any other group of musicians out there. While most sax players would be hard-pressed to tell you what brand of pads they prefer on their keys, most guitarists have a preferred brand and gauge of strings, dig a particular size of fretwire, have aftermarket pickups which they prefer for various applications, favorite brand of tubes for specific amps and so on.

We’re a persnickety bunch that revels in the boundless (and perpetually growing) variety the guitar gear market boasts, and that’s great! However, all of that hand-wringing and fussing over the minutiae of a signal path doesn’t mean squat if you’re hauling an ultra dialed-in rig out on a stage equipped with a dumpy PA. That’s why it’s smart to be as self-contained as possible, and for musicians slugging it out in bars or working other smaller spaces, that means owning your own PA.

While owning a sound system gives your band major boost in the flexibility of when and where they can perform, it also ensures that you have a consistent sound night after night — willing your playing and gear are also consistent! Additionally, owning and learning your way around your own PA means the anxiety of not knowing what system you’ll have to deal with at a gig is no longer a factor.

PAs are admittedly not the most exciting bit of kit to most guitarists and even higher end systems have historically been cumbersome, complicated affairs — rarely something bands invest in despite being one of the most important factors in their live sound. However, it’s almost 2020 and while most of us are still very happily wielding guitars that were designed (and in the eyes of many, perfected) in the Fifites, the PA game has improved dramatically in recent years. One really clever leap forward for travel-ready PAs comes from Bose in the form of its new F1 system.

The F1 system is a relatively lightweight stack that includes the 812, a full-range powered loudspeaker rated at 1,000 watts and equipped with Bose’s Flexible Array technology—plus an optional 1,000-watt powered subwoofer. This tech allows the user to angle and hone in the system’s coverage pattern to tailor exactly how and where your sound is delivered for different sized and shaped spaces, and the F1 automatically adapts its EQ to match and work for your coverage pattern — meaning your live sound isn’t at the mercy of the archetypical disgruntled sound guy or gal.

The F1 is roadworthy, easy to set up, relatively compact compared to the immediate competition, and foolproof to operate despite being extremely feature rich. Most importantly, the F1 system offers big power and Bose’s legendary sound quality. The F1 Model 812 is the only powered loudspeaker available that allows you to truly tailor in your sound spread, giving your band the chance to truly sound its best regardless of the venue. At only $899—the price of any entry-level guitar worth its salt and made on US soil by any of the major brands—the F1 punches well above its price point.