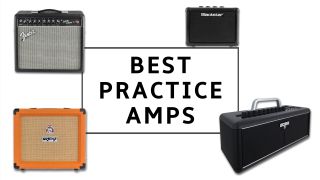 Yes, we know, the best practice amps aren’t exactly part of the 100-watt tube stack dream rig you daydream about, but they are a vital part of your overall bass or electric guitar setup. How come? Well, quite simply, practice amps enable you to practice your guitar playing on a quieter level.

While we’re partial to the sonic assault you get from pushing large amps into harmonic distortion, home practice doesn’t need stage volume. Your neighbours/kids/parents would probably agree. That said, we do need to keep ourselves fresh and our techniques precise, so having a smaller setup you can use at home without annoying anyone is a good investment.

The best amp for practice needs only to fulfil only a couple of major criteria. The amp needs to be relatively small, it needs to be easy to operate and, most importantly, it needs to sound great. On each of these counts the Fender Super Champ X2 ticks the boxes and is therefore our top pick for the best practice amp overall.

It’ll give you classic Fender ‘silverface’ tones, thanks to its tube pre and power amp sections, yet it includes a host of digital effects to broaden out the tonal spectrum. Recording over USB also adds a degree of utility to it, making the Super Champ X2 almost perfect as a studio amp.

Alternatively, the Blackstar Fly 3 makes for a fun little practice amp that will take up hardly any room in your rig, yet offers a surprising level of control for something so small.

How to buy the best practice amp for you

When choosing the best amp for practice, you are, in the best way possible, giving yourself some limitations to work within. A practice amp doesn’t have to sound like a $2,000 Mesa Boogie, nor does it have to cost as much. Essentially, a practice amp needs to get you up and playing quickly, without too much in the way of extra frippery.

At a base level, you’re looking for a way to plug your guitar in and have some control over the way it sounds. Of course, as guitarists, we all have an idea in our heads of how we want our instruments to sound, and of what we need an amp to do. Fortunately, modern practice amps are galaxies ahead of the standard catalogue fare that was around 20 years ago, where the ‘gain’ channel sounded like an army of wasps fighting in a plastic bag.

Now you can reasonably expect the best practice amps to have a selection of effects included, along with different amp voicings, the ability to record your sound into a laptop or computer, and even remote control over parameters via a tablet or mobile device.

The style and genre of music you play, or are learning to play, will have an impact on the best practice amp for you. Metal fans, for example, will want something that can cater for the saturated gain they require. Alternatively, you may like dipping your toes in the waters of many different styles depending on how you’re feeling on any given day.

Bear in mind that choosing a specialist amp, for a specific style, will often yield better results than a jack-of-all-trades amp designed to encourage experimentation, but you do lose that ability to try out different styles in an effort to improve your overall game. Choosing whether to purchase a smaller-scale ‘proper’ amp or a dedicated practice amp will dictate what is the best practice amp for you.

At a feature level, you’ll have some choices to make too. Tube amps are still far louder than their equivalent power solid-state amps, so a 20-watt tube amp will make the walls shake in your room. That said, many tube amps for practice often have some kind of built-in attenuation, so you can drop the power level down.

In our experience, even a 1-watt all-tube amp will more than suffice for home practice. Some practice amps have built-in recording capability, via a USB connected to your computer. Recording your practice sessions helps you listen back later to judge your performance, which is hugely beneficial.

Let’s now look at our list of the best practice amps, including superb options from Orange, Boss and Line 6.

While a proper, bona-fide high-end Fender tube amp offers the pinnacle of rich, warm clean sounds, it’s fair to say that greatness doesn’t come cheap. The Fender Super Champ X2, on the other hand, offers tube-driven tone and selection of well-considered effects at a price much more in the ‘practice amp’ realm.

It does this by employing digital elements to the tube signal chain, allowing for the use of different voices which make this an extremely versatile amp for practicing different styles.

A USB connection to the rear of the amp enables recording via a laptop or PC, making the Fender Super Champ X2 a superb choice for practicing within a home studio environment. All told, while this sits at the higher end of the practice amp spectrum, the quality and versatility on display make for a pretty compelling package, and a standout model in our best practice amps guide.

As the smallest amp on this list, you’d be forgiven for thinking the Blackstar Fly 3 is little more than a toy. If you’ve ever seen one up close, you’ll know exactly how small they are. Yet plug into one, and you’ll soon realise this little amp is almost the perfect practice amp.

Battery operated, small enough to pack into a backpack, yet packed with enough features to make them useful, the Fly 3 is a great option as a dedicated practice amp.

We particularly liked the Infinite Shape Feature, taken from some of Blackstar’s better known ‘big’ amps, which gives the user control over the EQ of a given tone.

We also liked the tape delay effect, which nicely rounded out our sound to make it less thin. Pair a couple of them together in stereo and you’ve got yourself a fun little practice setup.

This wireless mini amp is perfect for home use

Wireless guitar systems have long been favoured in a live setting for the simple reason that they grant the user a degree of freedom over where they can sit or stand. The Boss Katana Air now grants that same freedom to home users and, in the process, offers up a superb practice amp stuffed full of features.

There are tonnes of innovative tricks on display here, from the way the amp automatically switches on when it detects you’ve picked up the guitar, through to the dock on the amp itself for charging the wireless module.

Tonally the Katana Air is very high quality, with a selection of expandable effects and tones available over Bluetooth via the accompanying app. The two 3-inch speakers do an admirable job of producing stereo sounds, and we also liked the way it doubles up as a speaker for streaming regular music over.

We’ve heard it said before that new ideas are sorely lacking in the guitar world. After all, we still fetishize vacuum tubes and electromagnetism, yet with the Boss Katana Air there are plenty of modern flourishes designed to help players practice in a way that suits them.

The best practice amp for a multitude of sounds

Owning a Line 6 practice amp is almost a rite of passage for many guitarists. The brand has been pumping out cost-effective, feature-filled practice amps for years now, each time with incremental improvements to make them more suited to the trends of the day. With the Line 6 Spider V, that means the inclusion of mobile device connectivity for the deep editing of parameters.

Despite their budget reputation, the Spider range actually offers superb value for guitarists who like to try a little bit of everything. And, with over 200 preset amps, models and variations included, you’re bound to find something here you can use for practice.

Orange amplifiers are something of a connoisseur’s choice in the amp world. Beyond the garish colour scheme, the British brand’s most signature element is the unique gain sound they offer.

Thick, chewy, and heavy on the mid-range, Orange amps have one of the most distinctive and recognisable overdriven tones on the market. Its traditional tube models can be at the more expensive end of the ladder, yet with the Orange Crush 20 you can access amazing tone for a fraction of the cost.

Where other amps in this list have more in the way of bells and whistles, the Orange Crush 20 favours simplicity. Two channels, basic EQ and a meaty four-stage gain preamp make this something of a one-trick pony, but what a trick it is. Some reverb wouldn’t have gone amiss, but otherwise this is a compact, efficient machine which is ready to rock.

A shrunken version of the rock and metal classic

We couldn’t have a list of the best practice amps and not include a Marshall, right? Thankfully, in the Marshall DSL1CR, there is almost the perfect home practice amp for the tone-conscious rock and metal player. The traditional Dual Super Lead amps from the 90s were synonymous with heavy music, yet their size made them nigh-on unusable outside of a stage environment.

Cleverly, Marshall has taken everything from the original DSL range and shrunk it into a highly portable 1-watt combo, meaning you can get that classic high-gain sound without shattering all the windows in your house. The digital reverb is a nice touch, as is the effects loop, making this a high-quality option for the discerning player.

Portable package with plenty of versatility

View at Guitar Center
Lots of control over parameters
Battery powered
Not much!

Originally launched in 2011, the Yamaha THR range was the first to introduce the concept of guitar amps that wouldn’t look out of place on a bookshelf or kitchen work surface. Packing in plenty in the way of tones and functionality that the practicing guitarist would find useful, and doing away with everything else, the Yamaha THR5 makes a great practice companion.

We liked the amount of control you have on the amp itself, and this can be expanded further by using the accompanying Yamaha app. Newer models incorporate Bluetooth for further convenience, making the THR range almost perfect as your ‘lounge’ amp.

Ok, so this is clearly not an amp…or is it?

As a curveball to finish this list of best practice amps, we’d like to suggest something that clearly isn’t an amp at all. Bear with us here. Many players, ourselves included, struggle to find time to play ‘plugged in’ for reasons of lifestyle, young children or time. Practice often means being hunched down with a pair of headphones in and, if that sounds familiar to you, then the Zoom G3Xn might just be the answer.

As a multi effects unit the Zoom G3Xn packs in 68 different effects, as you’d expect, but what really appealed to us was the addition of amp and cab models. Using your trusty headphones, you get access to all the tones you could ever need in a handy pedal format, without annoying those in your vicinity.

As an upside, you can even incorporate the Zoom into your regular setup, making this both versatile and cost effective. It’s crazy, but it might just work.