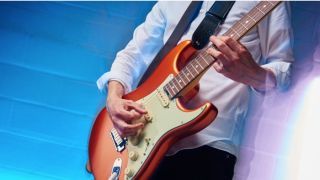 This month, I’d like to talk about using fourth intervals as a building block for both chords and solos.

Although this lesson leans more on the jazz side of things, this topic can be quite useful for better fretboard understanding even if jazz guitar isn’t your main thing.

Quartal harmony - chords voiced in stacked fourth intervals, are a familiar sound in jazz accompaniment, popularized by pianists (perhaps most notably, McCoy Tyner, well known for his work with John Coltrane) and adopted by modern improvising guitarists as well.

By stacking fourth upon fourth, we’re able to create a group of fairly easy-to-grasp relative chord shapes that can be moved through a mode. The result is an accessible group of choices for accompaniment (referred to in jazz street lingo as 'comping'). FIGURE 1 shows a Dm7sus4 chord built from stacked fourths based on the D Dorian mode (D E F G A B C). FIGURE 2 shows the chord in use with a line reminiscent of Miles Davis’ classic tune So What.

In FIGURE 3, I add another note on the first string, resulting in a chord of stacked fourths, topped by a major third. Three-string chords are excellent for quick 'stabs' and/or quickly bouncing off of each other, as demonstrated in FIGURE 4. The same is true with inside four-string chords, as shown in FIGURE 5. Once you begin to get these shapes under your fingers, you’ll be ready to put them to use by playing over a bass line, either by recording yourself, looping or, ideally, jamming with a real bassist.

There are also many books and play-along recordings to help with bass grooves. (I learned how to play bass lines with the help of one such book by bassist Rufus Reid, which is part of the Jamey Aebersold series of instructional resources, which I highly recommend!) FIGURE 6 offers one possible bass line, which incorporates some chromatic passing tones, followed by an improvised accompaniment of fourth voicings in FIGURE 7.

Now let's look at some melodic lines created by quartal voicings in combination with nearby scale tones. As FIGURE 8 demonstrates, there are numerous possibilities. This approach can help you break free from the habit of following patterns, such as the pentatonic scale, which we guitarists all too often tend to become overly dependent on. Finally, let’s look at a set of modal chords up and down the fretboard, which can be reduced to any number of strings.

We’re going to stay with five strings for now, utilizing diatonic stacked fourths exclusively, as shown in FIGURE 9. This is essentially the D Dorian mode played up and down multiple strings simultaneously. As always, go slow at first, don’t try to absorb too much at once, and listen to the sound of these concepts in action. Hopefully the video that accompanies this text will prove helpful in this regard.