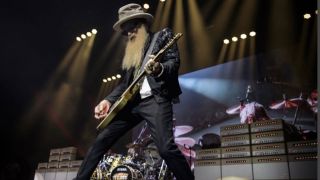 Born into a musical family, Billy Gibbons was playing in bands by age 14 - first with the Saints, then Billy G and the Ten Blue Flames, the Coachmen and the Moving Sidewalks, who were signed and recording before Gibbons was 18. Of course, it was ZZ Top that brought the guitarist major success.

With a unique brand of down ’n’ dirty blues-rock, the Texas trio’s early hits included La Grange and Tush, and, in 1983, Eliminator sent them into the musical stratosphere.

As for tone, Gibbons’ 1959 'Pearly Gates' Gibson Les Paul and white-fur-covered Gibson Explorer are the stuff of legend, but, with a huge collection to draw from, you’ll see various guitars in his hands (including the Mojo Maker on the facing page).

Get a private blues lesson from ZZ Top's Billy Gibbons

Still, a humbucker-equipped axe and a rich, tube-driven tone are a good start for a ballpark Gibbons sound. Amp-wise, the guitarist has used Fender tweeds and Marshall Plexis in his day, although he’s an enthusiastic fan of Magnatone lately.

Skinny strings (as low as .07- or .08) and a Mexican peso coin for a pick are the icing on Gibbons’ harmonic-laden tonal cake.

In FIGURE 1, we outline a ZZ Top-style shuffle riff, using the pick on the bass notes and plucking the higher strings with the bare fingers, a technique known as hybrid picking.

The low notes are palm-muted to help the more melodic stuff on the D and G strings cut through. Find a comfy spot on your guitar’s bridge where you can rest your pick hand to mute the low strings.

Much of the advice from FIGURE 1 applies to FIGURE 2, although you’ll notice that the second half of the four-bar phrase is less tight and focused, introducing some pull-offs and allowing notes to ring together.

There are times when your fourth finger will be the best option here (the fifth fret in bar 3, for example), so be prepared to make use of this oft-neglected digit.

The lick in FIGURE 3 incorporates bluesy finger slides and quarter-step bends. There’s an element of “feel” here, so be patient and let your technique develop gradually. Notice the pinch harmonics in bar 4 (indicated by the abbreviation P.H.).

The trick here is to lightly graze the string with your pick-hand thumb as you pick a downstroke over one of the harmonic nodes on the string, in the area over the pickups.

Dial in a bright, overdriven tone to help generate a squeal. You’ll need to “troll” up and down the length of the string as you pick to locate those exact sweet spots where the harmonic nodes are located.

FIGURE 4 is based on Gibbons’ take on a traditional blues line, and it’ll groove better and “sing” with some finger vibrato. Be sure to let the notes in bar 1 ring together!

There are a couple of pinch harmonics in bar 4. Touch the string with the side of your pick-hand thumb approximately 24 frets above the fretted note for a loud, clean squeal.

This is obviously a theoretical location beyond the fretboard, so estimate where that harmonic node would be, and 'hunt and peck' until you find it.

We’re getting a little more sophisticated with the phrase in FIGURE 5, but it’s more about the finer details than any especially complex licks - typical Gibbons!

Keep a close eye on the quarter-step bends and see how much they add to the feel by alternately playing the line without them. The fifth- to sixth-fret hammer-on in bar 1 is a cool blues idea used by many players.