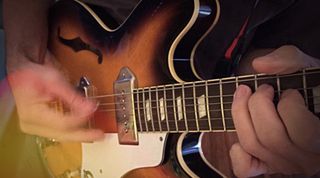 In this month’s installment of Absolute Fretboard Mastery (which happens to be the final installment), we’ll be going a little bit deeper into the modes we learned last month by learning how to apply them across our fretboard.

But before we get into that, I want to address a common misconception a lot of guitarists have when learning the modes. They think of modes as completely separate entities, as opposed to different aspects of one scale.

This was something that confused me too when I started learning about modes, so I want to make sure we’re absolutely clear on exactly what modes are and how they function.

Let’s start off by taking a look at the first position of the A minor pentatonic we’ve learned:

Say we were playing in the key of A minor; the pitches we would emphasize in this first position are the A notes, which are highlighted in the chart above. Of course, there are various other notes we could emphasize on in this position, but as long as the chord is A minor, we stick to emphasizing those A notes.

When we move to the second position of the A minor pentatonic scale, the structure of this position looks different from the first, but as long as we’re playing in the key of A minor, we’d still be trying to find those A notes to emphasize them.

In the same way, as we keep moving through the remaining three positions of the A minor pentatonic scale, we’d keep emphasizing those A notes.

Remember that if you want to change to a different key, you can simply move this shape around. For example, C major would be:

Going back to our example, let’s take a look at the second shape of the G major scale:

Sometimes people refer to this second position as Dorian. But we know from last month’s lesson that Dorian simply means “two,” and when we say we’re playing in A Dorian, we’re still in the key of G major and simply emphasizing the note A and the chord A minor.

But here’s the thing: Instead of moving to the second position, we can still stay in the first position of G major and target the A notes in that shape.

A good way of approaching this is to first memorize all seven positions of the diatonic scale across the fretboard. You can do this by tackling a couple of positions at a time, then connecting them to each other, the same way we did with the pentatonic scales, until you can connect them across the entire fretboard.

Once you’ve done that, and once you’ve also internalized what we learned in last month’s lesson, when someone says you need to play in G Dorian, all you’ll have to do is understand that you’re really in F major. Move all seven positions to coincide with the key of F and then emphasize the G notes across all the scale shapes.

By doing this, you prevent yourself from falling into the trap of segregating yourself to specific scale shapes when wanting to play in a specific mode. In addition, this helps with your absolute understanding of modes and how they relate to the major scales they are a part of.

As always, I hope you practice hard and work on these concepts until you internalize them. I’ll talk to you soon!