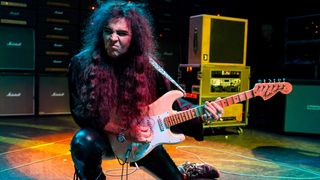 In this lesson, we’re looking at three ways Yngwie Malmsteen changes strings and how his picking orientation serves those various approaches.

The first is the Even Numbers strategy. With our pick orientation in place, escaped upstrokes make it possible to go to a lower or higher string on the next downstroke without obstacle. The best way to maximise that string-changing potential is to have a whole bunch of even-numbered alternate picking licks set up for it.

Example 1 expands on the E Phrygian Dominant lick with which we finished last month’s lesson. We now have a three-octave fire-breathing lick that is perfect for alternate picking and hassle-free string changes. The eight tremolo-picked notes in the first two beats of bar 1 help to prime the pump – getting your picking hand in motion before engaging more notes.

The maths of an even numbers system means that whether there are two, four, six or eight notes on a string, each string change involves an ‘escaped’ upstroke followed by a ‘planted’ downstroke. It’s a perfect option for ascending and descending Pentatonic scales too.

Example 2 uses all those numbers in an A Harmonic Minor descending and ascending phrase. Odd numbers of notes per string require changes to picking orientation when alternate picking.

Yngwie, being Yngwie, has developed separate strategies for both ascending and descending odd numbers which create an asymmetrical yet stylistic approach with contrasting sounds.

For ascending odd numbers, Yngwie calls upon the power of sweep picking. Maintaining DPO, the downstroke that occurs on the last note of any odd numbered group (here, therefore, three notes per string) is used to push through and begin the next string, as seen here.

Avoid doing this with two separate downstrokes. As you add or subtract strings from a pattern, the pick strokes assigned to each string remain the same.

Example 4 takes the idea through more string changes using the A Natural Minor scale. Using this double downstroke is called economy picking, but Yngwie is strictly a one-way economy picker – ascending only. Whereas someone like Frank Gambale economy picks in both directions and switches picking orientation to suit each one, Yngwie has a separate descending odd numbers approach.

Pick-gato uses alternate picked notes for the even numbered bulk of any string, then a pull-off (legato) is used to take care of the odd man out. This means that picking lines still begin on downstrokes and conclude on escaped upstrokes like the ‘Evens Strategy'.