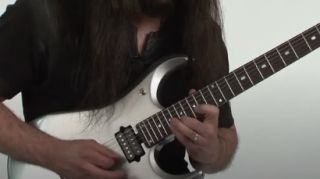 Here's the first installment of Chopin's Piano Concerto in A minor, Opus No. 2. I've arranged it for guitar, and as you can see, it's not for the meek.

But if you've been diligently practicing the chromatic exercises from my past few lessons, you should be ready to tackle it.

This etude is an excellent study in the use of chromatic tones in a melody. I've included chord symbols above the staff to give you an idea of the melody's harmonic context. These chord symbols reflect the basic underlying harmony originally provided by the left hand part on the piano.

Studying classical music, especially pieces from the Romantic period such as this, will give you serious insight into how to use chromatic passages in a composition or improvisation and have them make sense.

You might be wondering, how the hell can you use this chromatic stuff in a rock song? All you have to do is listen to some Dream Theater tunes for the answer.

For example, "Caught in a Web" has an extended chromatic passage [see the complete transcription in the Jan. '95 issue of Guitar School-Ed.]. The chromatic scale offers great material for writing cool riffs, but, more importantly, it gives you options for smoothly weaving in and out of a key center.

And by intelligently applying chromatic notes to your lines, such as using them as passing tones to connect chord tones that fall on the strong beats, they can become more original-sounding while still retaining harmonic logic. Of course, you can just play random chromatic lines all over the place, but that's a different, more atonal style of music.

Here are a few performance tips:

Chopin was a master of melody, harmony and voice leading--the art of smoothly moving from chord to chord. Though the melody of this piece is mostly chromatic, notice how he targets a chord tone on the first 16th note of each beat. Let's look at the first measure: although it's written using an ascending chromatic scale starting on A, notice how, when the chord changes from Am to Dm, the melody lands on F, which is the third of Dm. Over the E7 chord in the third measure, Chopin targets the third of that chord (G#). If you follow along, you can see other prominent examples of this harmonic device, such as targeting the lowered fifth of F7b5 (B) and the lowered seventh of B7 (A). This is what I referred to earlier as the logic of writing chromatic lines. This should give you plenty to work with. Next time, Part 2!