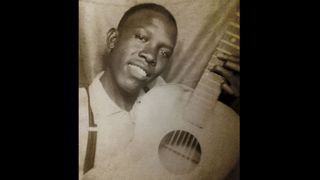 There have only ever been two published photos of Robert Johnson, the man whom Eric Clapton famously called “the most important bluesman who ever lived.”

In one, the blues acoustic guitar legend poses with a cigarette dangling out of the left side of his mouth and a serious look on his face. In the other, used for the cover of the 1990 Complete Recordings box set, he is sitting on a stool in a pinstripe suit.

Now, a new photograph of Johnson, believed to be third in existence, has been revealed.

The image, taken in a nickel portrait booth in Memphis in the 1930s, will appear on the cover of Brother Robert: Growing Up With Robert Johnson, the forthcoming memoir by his stepsister, Annye Anderson.

In an excerpt from the book shared with Vanity Fair, Anderson recalled the day the photo was taken.

“There was a make-your-own-photo place on Beale Street, near Hernando Street,” she writes. “I’ve since learned that a man named John Henry Evans owned it. The photo place was right next door to Pee Wee’s, the bar where Mr. Handy wrote his blues.

"One day when I was 10 or 11 years old, I walked there with Sister Carrie and Brother Robert. I remember him carrying his guitar and strumming as we went. You just walk in, drop a nickel in the slot, pull the curtain, and do it. There was no photographer. I had my picture made. Brother Robert got in the booth, and evidently made a couple.”

And while a big part of the Robert Johnson legend has always revolved around his supposedly selling his soul to the devil at a crossroads, as well as his mysterious death by poisoning at age 27, Anderson writes that the newly-revealed pic offers a glimpse at a lighter side of the bluesman.

“It shows Brother Robert the way I remember him – open, kind, and generous. He doesn’t look like the man of all the legends, the man described as a drunkard and a fighter by people who didn’t really know him.

“This is my Brother Robert.”