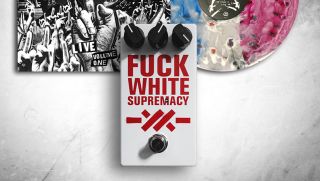 Last week we reported on several gear companies that have been responding to the current protests against police brutality and racism with special-run products and raffles.

The pedal is manufactured by Abominable Electronics, which also recently produced a new version of its Hate Stomper PCB emblazoned with the Black Lives Matter slogan.

Anti-Flag is raffling off four of the limited edition fuzz/distortion pedals to aid Black Lives Matter.

Additionally, one of the four raffle winners will also receive the grand prize: a fuzz pedal along with an accompanying vinyl pressing of the band’s Anti-Flag – Live Vol. 1 recording, with the burnt remains of an American flag pressed into the wax.

Four winners will be chosen on June 9, and 100% of the sales of the raffle tickets will go to the official Black Lives Matter global network.

To enter, head to A-F Records.