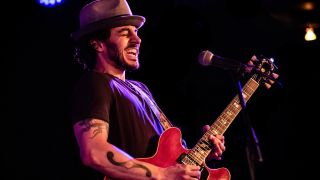 Ernie Ball has announced Artur Menezes as the winner of the Ernie Ball PLAY Crossroads contest.

Menezes, who has shared stages with the likes of Joe Satriani and Buddy Guy, is an instructor at the Musicians Institute in Hollywood.

Said Menezes, “I'm shocked. That's really a dream come true to play at the Crossroads Guitar Festival. I've been watching the DVDs since the first edition and it's a blessing being in the same place as my guitar heroes. Thank you so much Ernie Ball for this opportunity and thank you so much for everyone who rooted for me!"

The PLAY contest saw Ernie Ball team up with Eric Clapton to give one unsigned artist the chance to perform live at the 2019 Crossroads Guitar Festival on the Ernie Ball Stage and win thousands of dollars in prizes.