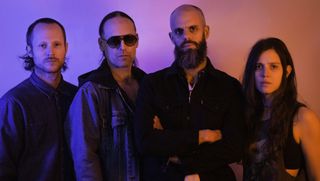 Baroness have shared the official video for “Seasons,” from their upcoming fifth album, Gold & Grey. You can check out the clip below.

Gold & Grey is due June 14 via Abraxan Hymns. The bulk of the album was recorded at producer Dave Fridmann’s (The Flaming Lips, Mogwai) upstate New York Tarbox Road Studio.

Said singer and guitarist John Baizley about the album, "The term I kept using was that I wanted to create something that was more kaleidoscopic than our former records. We were trying to say something new with our instruments, with our sound intact, with the spirit of the band intact, but not applying the typical conventions when possible.”

Baroness have also announced a five-week U.S. “Gold & Grey Tour,” kicking off on July 11. Tickets are on-sale this Friday, April 12, at 10 am local time.

Gold & Grey is available for pre-order here. See below for all tour dates.