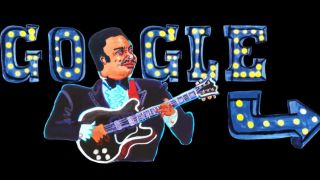 BB King, one of the greatest and most influential blues guitarists of all time, was born on this day, September 16, 1925.

We here at Guitar World are celebrating his birthday of course, but so - evidently - is Google.

Today's Google Doodle features an illustration of the blues icon, 'Lucille' in hand, which links to an animated video featuring King playing one of his biggest hits, The Thrill is Gone. You can check the video out below.

The video was created by Little Rock-based artist Steve Spencer and Brooklyn-based artist Nayeli Lavanderos. Its art was directed by Angelica McKinley, a native of Memphis, Tennessee, where King first began recording.

"Without having a full formal education and the guidance of his parents, King took the talent that he was given in a time period that wasn't kind to black people and devoted himself to sharing music that was the pulse of the Mississippi Delta with the rest of the world," McKinley told CNN.

"This music was created from pain that he knew all too well, but King decided to own it."