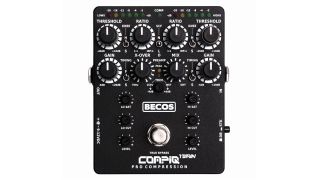 According to Becos, the pedal, which boasts two independent analog engines, can operate as a dual-band compressor/limiter with variable crossover point or as a stacked compressor with separate controls for each engine.

In either mode, harmonic saturation can be injected separately on each of the dry line bands, and then mixed with the wet compressed line. There’s also a separate gain reduction display for easy indication of how hard or soft the lows and highs are being processed.

Other features include a dry/wet mix knob for parallel compression in either of the working modes, a five-LED gain reduction display on each processing engine, true bypass switching and 9-12V DC external power operation.

The CompIQ Twain is available for preorder beginning March 1, at a price of $329. For more information, head to BecosFX.com.