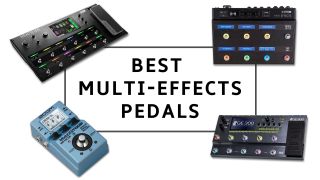 Replacing a pedalboard with a single pedal would have been unthinkable for most serious guitarists 10 years ago, but even the pros are ditching the standalones for floor processors, and if that appeals to you, our guide to the best multi-effects pedals will definitely be of interest.

When digital processing became powerful enough to emulate digital-sounding effects and organic, analog effects, the arrival of multi-effects truly began. Okay, so early units such as the Zoom 505 hardly set the world on fire, but thanks to advancements in modern guitar tech, they're making a serious comeback. And call us biased, but we think the multi-effects pedals listed here are well worth your consideration.

These days, it's common for multi-effects to offer amp and even cabinet modeling as well as guitar effects. Although it's worth keeping these in mind, for the purposes of our best multi-effects pedals guide, we'll be focusing heavily on the effects side.

For those of you who want to cut to the chase and find out what we think is the world's top multi-effects pedal for guitarists, allow us to clue you in...

What is the best multi-effects pedal?

In terms of both cost and its power, our number one choice for the best multi-effects pedal is the Line 6 HX Effects. All right, so without a screen it lacks some of the complicated functionality of the larger pedal... or does it? Instead, having a layout that's physically on the pedal and intuitive makes this Line 6 multi-effects a joy to use, in addition to being a powerful stereo effects unit.

If you don't need all the amp models and additional functionality of the larger Helix floorboards, it's a complete no-brainer.

The most important things to look for in a multi-effect are ease of use and its bank of effects. After all, if it's not easy to use, it's unlikely to be as useful a tool, and certainly nowhere near as much fun.

Different multi-effects focus on different sets of effects. Some stick closely to basic versions of staple sounds like delay, modulation, and reverb. Many, however, also try and throw in a few wildcard effects that you might find on more boutique FX pedals.

It's also worth considering how many parameters the unit typically offers per patch. Generally speaking, the more powerful the unit, the more parameters it offers. This can be a double-edged sword, however, as too many parameters can lead to option paralysis, where the number of available settings can be overwhelming.

You might also be thinking, 'Why digital multi-effects?' Well, the simplest answer is that making many analog effects fit in a small space is very difficult in terms of circuit design. Plus, ordering and re-ordering those requires a digital 'brain' to control the routing anyway.

That means, beyond a point, it's easier to do the whole thing in software. However, analogue multi-FX floorboards do exist from Tech21, Mooer and T-Rex, among others. Let's look a closer look at the best multi-effects pedals for guitarists...

With no screen, the HX Effects relies on scribble strips and coloured lights above the footswitches in order to indicate what's going on to the user and to edit patches.

It sounds like that shouldn't be enough to compete with the larger units, but this stripped-back interface is elegant and packing all of the effects of its larger brothers means it has all the firepower to make it the best multi-effects pedals you can buy, particular if you play live.

Moreover, besides the standard delays, mods and reverbs there's also some gems like the particle verb, which is a clear nod to boutique effects.

There are only six patches available on the front panel, but if that's an issue then you could always integrate it into a traditional pedalboard setup. It's not drastically more expensive than a single Strymon big-box pedal, and size-wise it's about twice the size of a Whammy.

Boss have been the market leaders in compact effects pedals since the early ‘80s, and chances are, if you're reading this, you own at least a couple yourself.

With their recent 500 series of studio-grade pedals, the DD-500 delay, RV-500 reverb and MD-500 modulation, they brought their expertise to a new form-factor and a higher-ticket area of the market. If you looked at the release of those pedals and thought "if I had a board of just those three, I'd be set," you'd be far from alone, and that's exactly what the GT-1000 delivers.

Obviously it's not just those three units in the box; yes a lot of algorithms were ported over, but there's also a state-of-the-art amp and cab simulator, as well as an IR loader.

If the HX Effects doesn't quite cover your needs, if you need amp modeling, or if you own a Line 6 Variax guitar, then the Helix LT offers all of the processing oomph of the full-fat Helix, but in a slimmed-down package without scribble strips or all of the inputs and outputs of the flagship.

Whether it's on-stage or for studio use, the LT is simply a beast, with great quality amps, effects, cabs, mic sims... you name it.

It's got eight assignable patches on the front panel, as well as bank change, tuner and tap switches and the best user interface of any multi-effect on the market, including Fractal Audio’s Axe-FX III, which is three times the price. What's not to like?

An upgradeable multi-effects pedal offering a huge selection of effects

The Fractal Audio AX8 is packed with enough amp and speaker cabinet models and multi-effects capability to last most players a lifetime of exploration. It’s also packaged in a super-durable pedalboard controller and costs a fraction of the price of Fractal’s flagship Axe-FX III processor.

The selection of amp and speaker cabinet models is huge and includes almost every vintage classic and workhorse from the ‘50s until today. Same goes for the effects, offering instant access to pedal and rack processor effects that would take a lifetime and a fortune to accumulate.

Internal memory stores 512 presets, but you also can save additional presets via the AX8’s USB interface when connected to a computer.

The best multi-effects pedal if amps are more your thing

With a huge amount of processing power on offer, the distortions on the HeadRush are really something to write home about. Drives have rich higher-order harmonics and plenty of headroom, interacting in a startlingly amp-like way with the on-board amp models and perform excellently when being used to boost a real-life amp in the room.

Though the HeadRush has the normal array of effects you'd expect - vintage delays and choruses, modern versions of the same effects, and some stereo variants - there's nothing truly outside-the-box here. If you're looking for wilder, space-cadet sounds, then unlike with the Boss and Line 6 units, you'll have to look at expanding to at least a couple of extra pedals alongside this floorboard.

Also, though it looks good on paper, the touchscreen is often more annoying to use than a regular joystick or arrow keys.

A powerful and compact multi-effect with a decent user interface

After a decade slugging it out at the lower end of the market with their distinctive micro-effects, Mooer have changed tack, and recently started releasing ambitious digital pedals.

The GE300 is their flagship unit and, fully loaded with excellent effects and a fantastic monosynth patch, it certainly delivers the goods. Our only issue with the unit itself is that by default the footswitches have the assigns on the second row, which seems a bit backward compared to competitors.

The other problem with the GE300 is that Mooer's success is built on them being highly price-competitive. As with the Ocean Machine, their Devin Townsend signature pedal, they've gone upmarket with the GE300 and there’s a price tag to match. The GE300 is a serious piece of kit, but it's hard to recommend it over the Helix LT when they're both around the same price.

A sleeper hit in some corners of the online pedal community, the Zoom is deceptively deep. Powerful enough to keep up with any single-pedal sized digital effect, yet versatile enough to take the place of a multi-effect in a pedal chain, the MS-70 models a variety of vintage and modern boutique effects within a tiny, stereo enclosure.

Its real power is being able to use six of its effects simultaneously in a chain, allowing for very expressive and unusual sounds to be created. Best of all, since it's so small, even if you only use those sounds in one song on the setlist, the MS-70 doesn't take up much space!

If you want a simple solution and don't want digital effects

The Tech21 isn't quite an analog option, but for multi-effects it's about as close as you can get. Although it's possible to make analog delays using old-school 'bucket brigade' chips, reverb effects require digital processing, and as a result the Fly Rig 5 is a hybrid unit.

Still, Tech21 know how to make a fantastic drive, and the Fly Rig 5 boasts a Plexi SansAmp and a boost, meaning it can be used in front of an amp or straight into a powered PA for maximum flexibility.

The delay and reverb are solid, if nothing to write home about - the real selling point here is how tiny this little beast is. If you don't require more than a simple delay and reverb besides drive options, then this is one of the best multi-effects pedals out there, especially as a back-up or - as the name suggests - fly rig.