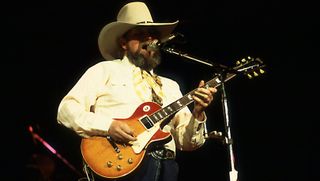 Singer, songwriter, band leader and multi-instrumentalist Charlie Daniels, best known for his 1979 smash The Devil Went Down to Georgia, died in Nashville on June 6. Daniels, who suffered a hemorrhagic stroke, was 83.

Daniels was a member of the Country Music Hall of Fame and played on three Bob Dylan albums, including the folk bard’s classic 1969 country crossover effort Nashville Skyline.

His career spanned more than six decades, during which time he became known as a fixture on the live country music circuit and, later in life, an outspoken supporter of US troops and veterans, as well as a voice for conservative and sometimes controversial views.

Charlie Daniels was born October 28, 1936 in Wilmington, North Carolina and cut his musical teeth on gospel, bluegrass, R&B and country. By the time he graduated high school, he was playing guitar, banjo, fiddle and other instruments, and began gigging with a bluegrass band, the Mandolin Boys, as well as the Rockets, who would later change their name to the Jaguars.

In his 20s, Daniels launched a career as a songwriter and session musician, co-writing It Hurts Me, recorded by Elvis Presley, in 1964, and playing guitar and bass on three Dylan albums – the aforementioned Nashville Skyline,  as well as Self Portrait and New Morning – and acoustic guitar, bass and fiddle on Leonard Cohen’s Songs from a Room and Songs of Love and Hate, among other recordings.

Daniels launched his own recording career in 1970 with his self-titled debut album, and scored his first hit with the 1973 song Uneasy Rider.

As the leader of the Charlie Daniels Band, he notched numerous hits over the next several years, including The South’s Gonna Do It Again and Long Haired Country Boy, while also playing on albums from The Marshall Tucker Band and Hank Williams, Jr.

But it was his 10th album, 1979’s multi-platinum Million Mile Reflections, which featured the unlikely hit The Devil Went Down to Georgia, that cemented his star status.

Highlighted by Daniels’ yarn-spinning spoken-word vocal and incendiary fiddle playing, Devil became a crossover hit, reaching Number 3 on the Billboard singles chart and earning him a Grammy for Best Country Vocal Performance in 1979. The next year it was featured in the film Urban Cowboy.

"I play guitar about two-thirds of the time onstage, and the fiddle only about a third," Daniels mused to the News-Press in 2008. "But my biggest hit was a fiddle song. That's what people remember."

Devil was later included, in a heavy-metal version, as a playable track in Guitar Hero III: Legends of Rock, which Daniels took issue with.

“The song, The Devil Went Down to Georgia, which I wrote, is supposed to be a lighthearted novelty about a fiddling contest between a country boy and the devil and the devil always loses,” he stated at the time.

“That is not the case with the Guitar Hero version, which comes complete with a horned, guitar-playing devil who battles the player and very often wins.”

Though he never achieved such massive mainstream success again, Daniels continued to be a visible and cherished member of the country music community for the remainder of his career.

In 2008, Daniels became a member of the Grand Ole Opry. For the induction ceremony, he brought along the childhood friend who had first taught him to play guitar on an old Stella acoustic.

"I just went over to his house one day," Daniels told the News-Press. "I didn't even know he had a guitar. And it wasn't much of a guitar, either."

He continued, "I always wanted to learn to play, but I didn't have an instrument. We fumbled and fiddled around, and I finally learned how to play the thing."

He was inducted into the Country Music Hall of Fame in 2016, and released his final album Songs in the Key of E, with the Beau Weevils, in 2018.