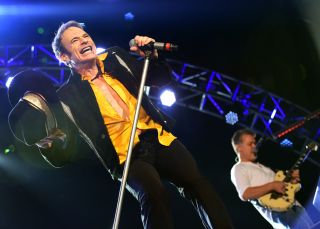 Van Halen have been inactive since completing their 2015 reunion tour, but frontman David Lee Roth reemerged on the public stage this past week, giving characteristically wild and entertaining interviews about his new tattoo skin care line, Ink the Original.

His latest interview is with New York magazine’s Vulture.com, and in it, Roth drops a few nuggets about upcoming plans—big plans, as he tells it—in the Van Halen camp.

At the top of the interview, he’s captured telling anyone who will listen in New York’s copyediting department about what's to come with the band:

“When we come back through town in the summertime and do the original thing, maybe somewhere sportin’, maybe with somebody famous, I’ll make sure we get you all tickets so you can see what we do for gainful employment. My mom still wonders.”

Later on during the sit-down portion of the interview, writer Lane Brown asks Roth about that moment: “Are you telling me that Van Halen will play Yankee Stadium next summer? You promised four New York copy editors free tickets today.”

When pushed further, he elaborates—sort of—saying that Van Halen “is solvent. And I can say that I contacted colleagues about being part of the show — Metallica, Guns N’ Roses, Jason Aldean, the Foo Fighters, [Eric] Church, and [Chris] Stapleton. And they all said that, if everything happens, they would certainly be involved.”

It remains to be seen whether or not this big-name mega-blowout bill will come to pass at Yankee Stadium. But consider this fair warning.