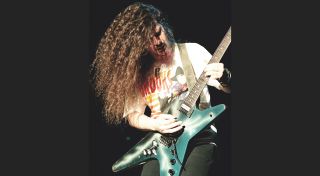 Buddy "Blaze" Webster, a childhood friend of Darrell “Dimebag” Abbott who played an instrumental role in the creation of the Pantera axeman's iconic Dean From Hell electric guitar, has asked a court to reinstall his lawsuit against Dean Guitars, which he claims stole his copyrighted design.

As previously reported in Guitar World, in April 2017, Dean, along with the Darrell Abbott Estate and multiple additional defendants (including Dime’s brother, Pantera drummer Vinnie Paul Abbott, who passed away in June 2018) were served with a copyright infringement lawsuit by Webster, a luthier, who contended that he created the guitar’s famous lightning storm graphic and had never received compensation for its reproduction on various Dean models.

But a summary judgment entered in the Middle District of Florida in 2018 ruled in favor of Dean and the Abbott Estate, citing that the statute of limitations for Webster  – who had been aware of the various Dean from Hell models produced over the years, and who had also collaborated with Dean on another line of guitars, the Buddy Blaze ML – to bring his copyright infringement claim had long expired.

Now, according to Courthouse News, Webster’s attorney argued to a three-judge 11th Circuit panel that the designer is entitled to a trial in the case and asked the judges to reverse the lower court’s decision.

The attorney further stated that Webster initially avoided legal action out of fear of upsetting Abbott’s fanbase following his murder onstage in 2004.

But an attorney representing Dean Guitars countered that Blaze’s opportunity to sue Dean or Abbott’s estate over the design passed by years ago. “Pantera was a beloved band then. They are now. So why couldn’t he sue back then?,” Dean's attorney asked.

Currently, the panel has not indicated when it would reach a decision in the case.

In the meantime, you can check out Dean’s most recent version of the Dean From Hell here.