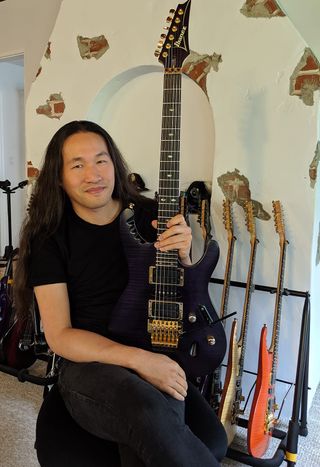 DragonForce guitarist Herman Li is auctioning off a one-of-a-kind 2007 Ibanez prototype from his private collection on Reverb.com. According to Li, 100 percent of the proceeds of the auction will go to benefit the family of Cody Spiess, who was diagnosed with Crutzfeldt-Jakob disease (CJD), an extremely rare, terminal brain disease.

Li’s Ibanez is a pre-EGEN 18 TVF Prototype with an Edge bridge, which he says is the “only one like it ever produced.” The guitar was played on DragonForce's Ultra Beatdown album and on tour in 2008 to 2009. Recently Li also used the Ibanez to record solos on the latest DragonForce album, to be released in the fall of 2019. The guitar was recently professionally set up by the Ibanez Los Angeles Custom shop.

Features on the Ibanez include a mahogany body with a flamed maple veneer, a 5-piece maple/ walnut neck with an all access joint, a rosewood fingerboard and DiMarzio pickups.

Says Li, “I’ll include a personalized message with the guitar, and provide some awesome extras (signed T-shirts, posters, picks, and more)!”

Currently, the Ibanez has 62 bids and is selling for $6,100. For more information on the guitar and the auction, or to enter a bid, head to Reverb.com.

For those who are not bidding but would still like to donate, Cody's family has set up a Go Fund Me page here.