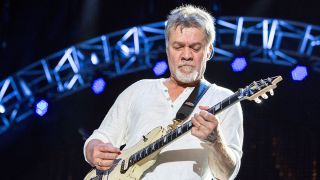 There have been countless rumors surrounding the long-mooted but ultimately ill-fated Van Halen reunion tour, but if recent reports are anything to go by, the delay is down to Eddie Van Halen’s health, as new reports indicate the electric guitar hero’s throat cancer has returned.

According to TMZ, EVH has been flying to Germany for treatment, potentially for several years, which is helping to “keep the disease in check”.

The game-changing guitarist blamed his initial diagnosis on holding metal guitar picks in his mouth, and was declared cancer-free in 2002 after doctors removed part of his tongue.

The band’s last performance was in October 2015 at the Los Angeles Hollywood Bowl, but David Lee Roth poured cold water on talk of a reunion this year when he declared the band “finished”, claiming that “Eddie Van Halen’s got his own story to tell - it’s not mine to tell.”

Earlier this month, Steve Lukather also commented that the band had "health issues that they're dealing with".

Eddie Van Halen has yet to confirm reports of a diagnosis or treatment.