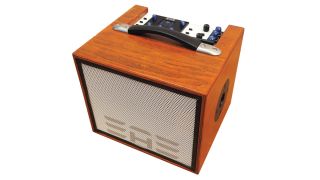 Other features include two high Z, four mic (with +48V phantom power) and six line inputs, independent effects on each channel, a three-band EQ, Bluetooth streaming and an eight-inch woofer and one-inch tweeters.

The D6-8 PRO weighs in at 18 pounds and is available for $899. For more information, head to Elite Acoustics.