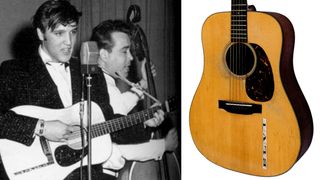 Elvis Presley’s 1942 Martin D-18 acoustic guitar recently went up for auction with Gotta Have Rock and Roll, and now the iconic instrument has sold – for a whopping $1.32 million.

The sale price set a new record for a piece of Elvis memorabilia, and it’s not hard to understand why. Often referred to as Presley’s “Sun Sessions” guitar, he used the D-18 extensively while recording at Memphis’ Sun Studios and onstage between 1954 and 1956, and can be seen playing the acoustic in many photographs from the era.

That said, the final price didn’t reach the original $2m - $3m estimate set by the auction house. The identity of the buyer has not been disclosed.

The D-18 is currently on display at the Rock & Roll Hall of Fame in Cleveland, and was featured in the 2019 Play It Loud: Instruments of Rock & Roll exhibit at the Metropolitan Museum of Art.