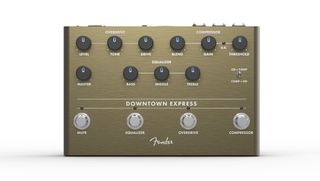 Fender has announced the addition of six new pedals to its growing line of effects. The new offerings are: Bubbler Chorus, Lost Highway Phaser, MTG Tube Distortion, Downtown Express, Tre-Verb and The Pinwheel.

The pedals were designed in-house by a team headed up by Stan Cotey, who spent 25 years in professional audio as well as 13 years designing and engineering many of Fender’s digital and tube guitar amplifiers. Each unit boasts an exterior crafted from lightweight, durable anodized aluminum and switchable LED-backlit knobs.

For more information from Fender on each new unit, see below.

From the company: The Bubbler Chorus is a great way to add some dimension to your guitar tone—thick, wide and rolling, it’s been the foundation of many classic guitar sounds. It breathes new life into this classic analog effect, offering new ways to shape your tone. Switchable Slow and Fast speeds with independent Rate and Depth controls let players dial in the perfect sound for your music, while the Wave toggle switch lets you select between traditional Sine and Triangle waveforms. The Sensitivity control allows modulation rate changes based on your playing dynamics.

The Lost Highway Phaser brings powerful, flexible analog phasing to your rig. Foot-switchable Fast and Slow speeds— each with their own independent Rate and Depth controls—let you easily alternate between slow, moody phase shifting all the way to rapid and warped modulation. The Wave toggle switch selects between Sine and Triangle waveforms while switchable 4- and 8-stage phasing makes it easy to add extra resonance on the fly. The Sensitivity control allows modulation rate changes based on your playing dynamics.

The MTG Tube Distortion is co-designed with Bruce Egnater and is an all-original Fender circuit. Instead of trying to emulate the sound of tube breakup; we decided to use actual vacuum tubes and give players the real deal in a compact pedal. The heart of the MTG’s design is a NOS (New Old Stock) American made 6205 preamp tube. 3-Band EQ with Tight control and switchable boost—with its own Level and Boost controls—makes it easy to dial-in just the right sound.

The Downtown Express is a one-stop shop for bass tone-shaping by putting everything a player would need for killer bass tone right  at their feet. All the bass essentials are there— compressor, 3-band EQ and overdrive—each switchable on its own, or kill the signal for silent tuning. The Direct Output makes it easy to integrate this pedal into any performance situation—stage or studio. This pedal also includes a switch that lets players reorder the compressor and overdrive circuits to taste.

The Tre-Verb brings players the sound of genuine Fender amplifier Tremolo and Reverb effects. These lush, dynamic amp effects inspired entire genres of music. Included in the Tre-Verb are classic reverb voicings based on Fender’s renowned spring reverb units from 1963 and 1965 and multiple tremolo modes to make sure players can get the exact sound they need for their music. A full suite of tone-shaping controls, including tap tempo for the tremolo effect, make this pedal sonically flexible, while the stereo inputs and outputs ensure it’s easy to connect to any pedalboard or amp.

The Pinwheel gives a classic sound achieved with an organ speaker and amplifier. Featuring three different rotary speaker voices, including Fender’s very own Vibratone effect. Switchable Slow and Fast speeds let players spin up the perfect sound for their music, while the onboard Overdrive adds some texture to the tone. The Sensitivity control allows modulation rate changes based on playing dynamics.

For more information, head over to Fender.com.