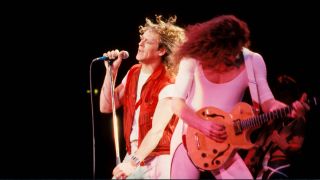 British singer, songwriter and vocalist Brian Howe, best known for fronting hard rock legends Bad Company in the 1980s and 1990s, has died of a heart attack. He was 66 years old.

“It is with deep and profound sadness that we announce the untimely passing of a loving father, friend and musical icon,” said Howe’s manager Paul Easton in a statement.

Born in Portsmouth, England, Howe got his start playing with a local act named Shy, and then had a brief stint with New Wave of British Heavy Metal band White Spirit.

His debut on the international rock stage came with Ted Nugent, when he was tapped for the lead vocal slot on the electric guitar player’s 1984 album, Penetrator.

After that relationship went south, Howe was introduced to Bad Company’s Mick Ralphs and Simon Kirke, and the idea of starting a new band was formed. Atlantic Records insisted they keep the Bad Company moniker, and Howe stepped into Paul Rodgers’ slot as the reconstituted band’s new lead singer.

“Almost without exception, everybody that I knew in the business told me, ‘Brian, taking over from Paul Rodgers, you’ve just fucked yourself. Why would you even consider doing something like that?,' " Howe recalled to Classic Rock.

“I just wouldn’t let them be right, which provided a focus and caused me to work a lot, lot harder.”

With Howe on board Bad Company recorded four studio albums, beginning with 1986’s Fame and Fortune and culminating with 1992’s Here Comes Trouble.

Howe left Bad Company in 1994, and released his first solo album, Tangled in Blue, in 1997. A second solo effort, Circus Bar, featuring re-recordings of two of his Bad Company hits, How About That and Holy Water, came in 2010.

Speaking about his craft around the time of the release of Circus Bar, Howe told Rock and Roll Report, “I am not a guy who writes songs all the time: I store ideas and when the time is right they pop out.”