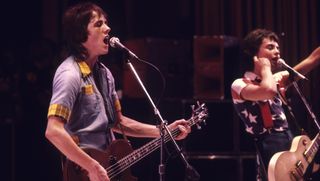 Former Bay City Rollers bass player Ian Mitchell has died at the age of 62. No cause of death has been announced.

Mitchell’s passing was confirmed on the band’s official Facebook page: “We are deeply saddened by the news of Ian Mitchell’s death,” the statement read. “Our thoughts and prayers are with his wife Wendy, their family and friends. Rest In Peace, Ian.”

The Bay City Rollers’ history stretches back to 1964, when the seeds of the band were sown by teenage brothers Alan Longmuir (bass) and Derek Longmuir (drums) in Edinburgh, Scotland. In the 1970s the band achieved pop-idol status with hits like Shang-a-Lang and Saturday Night, being tagged as the “tartan teen sensations from Edinburgh,” due to their heavily tartan-patterned costumes.

Mitchell joined the Rollers at the height of their popularity in 1976, replacing founding bassist Longmuir. With the Irish-born Mitchell, who was just 17 – and the only non-Scottish member – on bass, the band issued the album Dedication and achieved a hit with a cover of Dusty Springfield’s I Only Want to Be With You.

Mitchell’s tenure with the band only lasted several months, however. The bassist soon quit and was briefly replaced by Pat McGlynn, with Longmuir returning to the fold in 1978.

Bay City Rollers guitarist Stuart “Woody” Wood, who was part of the band’s classic '70s lineup, penned his own tribute to Mitchell, stating, “Very sad, sad news about Ian Mitchell. We’d like to send our love and condolences to Wendy and all Ian’s family and friends…you are in our hearts.”

“I have many fond memories of Ian not only in the BCR days but also when we played together in the ’80s with The Passengers…great guys and great days! You will sorely be missed Ian.”