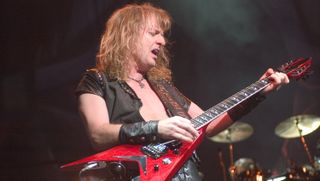 International auction house Bonhams will be auctioning off 11 guitars from the collection of former Judas Priest member K.K. Downing next month as part of the Entertainment Memorabilia auction.

The instruments up for sale include the 1967 Flying V that was Downing’s main guitar on Judas Priest albums spanning from 1976’s Sad Wings of Destiny to 1981’s Point of Entry. Other guitars in the auction include a custom V by Dan Johnson; a 1965 Fender Stratocaster; a 1971 Gibson Flying V Medallion; a ca. 2004 Gibson Flying V prototype; a ca. 1982 custom Hamer Vector; an Ovation Adamas acoustic; a 1972 Fender Precision bass; and more.

Additionally, various Marshall and Mesa Boogie amp heads will be up for sale, as well as a pair of leather jackets from the Turbo and Screaming for Vengeance tours.

The auction is scheduled for December 11 at Bonhams' New Bond Street premises in Central London.

For more information and to view the entire collection, head over to Bonhams.com.