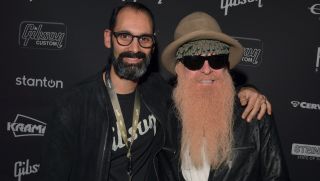 Gibson experienced a massive resurgence in 2019 under the leadership of new CEO James 'JC' Curleigh and CMO Cesar Gueikian.

But there were also a few missteps for the storied electric guitar company along the way, most infamously the Play Authentic video uploaded to YouTube last June (and pulled down shortly after) in which Director of Brand Experience Mark Agnesi appeared to be delivering a thinly-veiled threat to other guitar manufacturers building Gibson-esque designs.

In a recent interview, Guekian addressed the notorious video, as well as the ensuing controversy.

“I personally made the mistake of having Mark do that video, and if you ask me what I’d like to have done differently, it’s that," he told Guitar.com. "At the end of the day our objective is for us to protect our fans, and when someone buys a Gibson they expect the quality of a Gibson, and that’s a good thing.

“But using social media to try and deliver the message was probably my biggest mistake, and in hindsight, I think I shouldn’t have done that. What I was trying to do, I didn’t see it as us being ‘threatening’ or anything like that.

“We want our fans to buy our guitars because they believe we are making the highest quality instruments and that they are made to a higher quality standard than any other manufacturer. And all we wanted to do was to protect them from anything that could be misleading.”

Soon after the controversy, Gibson announced the Authorized Partnership Program, which enables boutique builders the opportunity to work directly with the company on instruments that mirror “iconic shapes” like the Flying V and Explorer. So far, the company has partnered with Jimmy Wallace Guitars, Banker Custom Guitars and Echopark Guitars.

Addressing the initiative, Gueikian explained, “It’s just an amazing way of celebrating the craftsmanship background that Orville left to us. He started as a one-man shop in Kalamazoo, and if you look at Matthew Hughes from Banker, he’s a one-man shop, and he’s making amazing instruments. It’s a way to celebrate our past and our history with Orville.

He continued, “We inherited, from the previous owners, a legacy of confrontation and litigation, which we have essentially now been putting to bed. There are literally just one or two situations that we haven’t been able to resolve amicably, and not because of a lack of intention on our side. But everything else, why not collaborate with those who are doing really cool things?"

As for future partners under the program, Gueikian said, "We haven’t yet put anything out there, but there’s an amazing builder called Leo Scala who I’m working with – Scala Guitars. He has a workshop in LA, and I went there I saw his work and met him – it’s amazing what he’s doing, and that’s something that I think will work by partnering with Kramer.”