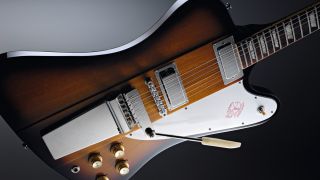 Gibson has suffered another defeat in its quest to secure trademarks for its body shapes in the European Union: after losing the trademark for the Flying V shape back in June, the company has now had its mark for the Firebird shape cancelled, too.

According to Guitar.com, the Cancellation Division of the EU Intellectual Property Office came to a similar conclusion regarding the Firebird as the Flying V, claiming it “does not consider this to be significantly different from the normal style of electric guitars”.

The fact that Gibson waited 50 years since launching the first Firebird models, first filing for trademarks in 2011, also contributed to the decision.

As with the Flying V case, Warwick and Framus owner Hans-Peter Wilfer brought the application against Gibson.

One of the more notable observations from the case was that even if guitarists can clearly identify a guitar outline, the more pertinent factor is whether it means anything to a non-player - which apparently it doesn’t, at least when it comes to the Firebird.

“Guitar body shapes may perhaps function as trademarks for a tiny club of expert and discerning guitarists, but not for the average amateur, who is the relevant public in assessing distinctive character in this case,” the EUIPO stated.

This decision only relates to the body shape as it appears on guitars; Gibson still possesses the trademark in all other areas, most notably merchandise.

And, of course, Gibson’s trademarks remain in the USA, with the Flying V forming a key part of its ongoing lawsuit against Dean Guitars in the USA.