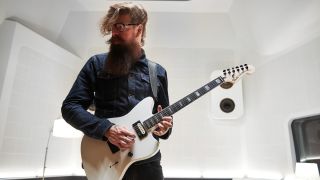 Jim Root recently unveiled his fourth electric guitar collaboration with Fender, the brutally minimalist Jazzmaster V4. But don’t expect to see the Slipknot guitarist noodling away endlessly on it.

“I love to do them,” Root told Guitar.com. “They’re a lot of fun and, of course, you want to showcase your skills. But if the song doesn’t need a guitar solo, why put one in there?"

Root continued, “I always find myself overthinking solos to the point where they don’t feel natural. I want to showcase my skills but I also want to play for the song. It makes me fucking crazy!”

This is perhaps an unusual take for a guitarist playing heavy metal, where the solo traditionally holds pride of place. But Root’s preferences when it comes to the guitar itself – he favors classic Tele, Strat and Jazzmaster designs – is somewhat atypical.

Which is what he likes about working with Fender. As he explained about his first pairing with the company, which resulted in a signature Tele model, “I thought it was cool because no one expects somebody to play music like Slipknot’s on a Telecaster – something you’d see Tom Petty with. I thought that was a nice cool juxtaposition.

“At the time, I was like, ‘Well, I’m gonna go against this.’ It’s sort of my anti-metal punk-rock mentality.”

As for future signature models he’d like to explore with Fender?

“I’d love to do a Meteora,” Root mused. “They’re really cool. But I feel like I’ve asked [Fender] for a lot already. I might be pushing my luck!

"Maybe we could even do a Coronado? I’d like to try it with one of those – it might make me approach guitar playing a little differently.”