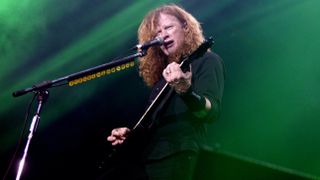 It was just this past June that Dave Mustaine revealed publicly that he had been diagnosed with throat cancer.

But now the Megadeth singer and guitarist has announced that he is “100 percent” cancer-free.

At Megadeth’s show at London’s SSE Arena on Friday he addressed his battle with the illness from the stage, telling the audience:

He continued, “At first, I thought, 'Am I afraid?' And then I said, 'No. I'm fucking pissed.' We stopped the record – we stopped everything. I went into treatment for cancer.

“It was 51 radiation treatments and nine chemo treatments and when it was all said and done, every day I would think, 'I can't face not playing again,' so I would pray.