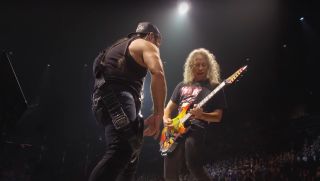 As they’ve done on previous legs of the WorldWired tour, Metallica guitarist Kirk Hammett and bassist Robert Trujillo used their co-solo spot at last night’s show at the Target Center in Minneapolis, Minnesota, to perform one of their “doodles”—a tribute to a legendary local act from the city or state the band is playing in.

For the Minneapolis gig the two played a snippet of Prince’s 1984 smash, “When Doves Cry,” with Trujillo—and the Target Center audience—on vocals.

Check out the performance below:

Metallica’s current leg of the WorldWired Tour kicked off in Madison, Wisconsin, on September 2. All current tour dates can be found below: