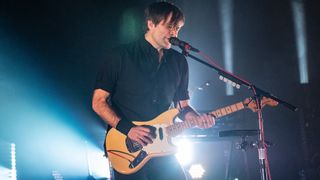 For the members of Los Angeles-based rock band, Wallows, right now nothing is certain. The band, which released its latest single, OK, on Friday, had planned for mid-March to be a joyous occasion, one in which the members could connect with fans, enjoy the creative synergy that comes with a new release and bask in the glow of a job well done.

But for Wallows, and thousands of bands like it around the world, spring of 2020 - otherwise known as the era of the dangerous Coronavirus - is as uncertain a time as the group has ever experienced.

To date, hundreds of people around the world have died from the Coronavirus, with more expected. Thousands are sick and filling up emergency hospital beds. Cities around the globe are on lockdown. To help offset the disruption in normal life, musicians in many areas have offered a reprieve with digital concerts and song releases.

And while Wallows’ Friday release has already amassed over one hundred thousand views on YouTube, the band says there is still something seriously off, wrong and maddening about this moment.

“Everything is in flux,” says Wallows band member, Dylan Minnette. “It’s really shocking and scary because there is such widespread range of information. You can hear one thing one minute and hear another different thing within 10 seconds. But everyone is going through the same experience.”

Indeed, along with Wallows, some 1,000 miles north of Los Angeles in Seattle, Washington, local rock band The Black Tones, which is comprised of twin siblings Eva and Cedric Walker, can’t even make time to see one another face-to-face for either band practice or as family members during the virus scare. Instead they’re reduced to cell phones from a distance and FaceTime as requirements for quarantine increase.

“I feel bad for a lot of my friends,” says Eva, whose band was scheduled for local festivals like Treefort in Boise, Idaho, and massive ones like SXSW in Austin, Texas before they postponed or cancelled. “Many of them rely on gigs for money for rent, food and other necessities. I don’t know what’s going to happen for them or for us. I don’t know when we’ll get to play again.”

The members of Wallows also can’t spend time in one place together. A citywide social distancing and self-quarantine requirement in L.A. has reduced their band meetings to video chats and text message threads from various L.A. abodes. And while the members say they are working on songs and writing new ones, there’s no telling when they might be able to rehearse, finish material, get in a studio or tour again.

Wallows hope they can reschedule dates planned for Spring for the Fall, but of course that’s still very much up in the air. Death Cab For Cutie frontman, Ben Gibbard, whose Grammy-nominated band has also been forced to cancel or postpone several dates, also knows what this temporally amorphous waiting period feels like.

Looking to the future past the next day or two is a fool’s errand, Gibbard explains. In an age when hospitals and medicine proliferation are a priority, it’s impossible to tell when things like music tours will recommence.

“I don’t think it’s worth extrapolating too far into the future right now,” says Gibbard, who also fronts the Platinum-selling electronic project, The Postal Service. “We have no idea where we are in this curve right now. We just have no way of knowing. To predict what the future is going to look like is not something I can give much brain space to right now.”

Gibbard is, however, focused on the present. And what that means for the acclaimed musician is regular handwashing, keeping a day-to-day routine and performing daily digital acoustic live-streamed concerts from his home studio. The digital home shows, which have garnered hundreds of thousands of views each day, are something Gibbard says is both for his fans and for his own sanity. Keeping a regular schedule, for the musician, is paramount.

“I could speak of it in grandiose terms about what I feel I’m giving back to the community,” say Gibbard, who recently released a new song, “Life Under Quarantine.” “But at the same time, the main motivations for this is that it’s giving me something to do everyday, as well. This is giving me a focus.”

Gibbard, who along with his digital concerts has been raising money for various charities in Seattle, including the University District Food Bank and the Aurora Commons, says that helping in this crisis is one way artists - or people of any kind - can both stay occupied and, perhaps, alleviate some of the stress. While many are struggling financially, Gibbard notes, there may be other ways to help.

“I think that the barrier to altruism for a lot of people is just knowing where to start,” offers Gibbard. “People want to be told what to do and if you’re able to lay out something specific, like, ‘If you have a can of beans, drop it off at this address,’ then people will say, ‘I can do that. I can make that happen.’”

But the Coronavirus isn’t just impacting tours and face-to-face interactions between musicians and fans. It’s also affecting the production of music, itself, both in the recording industry and in the record pressing industry. Los Angeles-via-Philadelphia-based band, Man Man, which is fronted by songwriter, Ryan Kattner, is still waiting for the vinyl pressings of its latest album, which were set for delivery this month. But they may never come.

“I found out today that the vinyl albums are literally on the assembly line floor being pressed today in California but the plant just shut down,” says Kattner, who will soon release the first Man Man LP in seven years. “The label is trying to get the Master plates back so we can move it to a state where production hasn’t been shut down yet.”

In an age when people around the world are worried about the Coronavirus global pandemic, it’s easy to let imaginations run wild. Many in industrial countries like America have never experienced a Great Depression or famine in their lifetimes.

Hundreds of thousands of people around the world are going through new stages of grief, panic, anger and who knows what else emotion. But in this worried time, many are looking to musicians for a respite, guidance. While traditional avenues like tours or physical releases may not be available to artists like Wallows, The Black Tones, Ben Gibbard or Man Man at this time, the music will continue to live, it seems, in some form or another. And people are still listening.

“Now we have months and months off,” Minnette says. “We have more time and we’re going to be as productive as possible. We have to figure out how to remain productive musically together while not being physically together. It’s going to be a process for the next few months while we wait this out. But hopefully it will ultimately bring us closer together.”

We asked each band for some music recommendations for readers stuck inside in need of new tunes. Here is what each suggested: