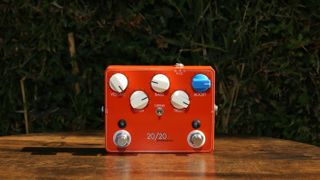 Pop-punkers Knuckle Puck are gearing up to release a new album, 20/20, on September 18.

But in the meantime the band’s electric guitar player, Nick Casasanto, has collaborated with Mike Pappalardo of Compendium Engineering on a new pedal, the 20/20 Overdrive, which aims to recreate the “thick, overdriven tones” heard on the forthcoming record.

The pedal features a drive circuit on the left and an IC-driven boost on the right, with knobs for volume, gain, bass, treble and boost, as well as a clipping switch.

Users can dial in everything from light boost to saturated distortion/fuzz, with three levels of gain.

Said Casasanto about the 20/20 Overdrive: "Knuckle Puck is a band that has always put an emphasis on guitar tone by riding the line between heavy distortion and sparkling cleans. Over the years, this was achieved by combining multiple-channel amps with one or two other distortion pedals in order to properly gain stage.

“With the 20/20 Overdrive, we've eliminated the need for more than one pedal, saving you precious space on your pedalboard and simplifying your quest for the perfect overdriven tone."

The 20/20 Overdrive is available for $165. For more information, head to Knuckle Puck.