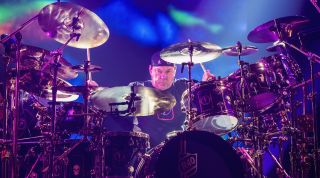 Neil Peart, the drummer and lyricist of the iconic Canadian prog-rock band Rush, has died at the age of 67, CBC News reports.

According to a statement issued by Peart's family's spokesman, Elliot Mintz, Peart had been diagnosed with brain cancer. His death was confirmed by Meg Symsyk, Rush's media spokesperson.

Held in incredibly high regard by musicians around the world, Peart helped define the immensely successful and influential Rush with his thunderous drumming and eloquent, sophisticated lyrics.

In a statement released this afternoon, Peart's Rush bandmates - Geddy Lee and Alex Lifeson - called Peart their “friend, soul brother and bandmate over 45 years,” and said he had been “incredibly brave” in his battle with cancer.

“We ask that friends, fans, and media alike understandably respect the family’s need for privacy and peace at this extremely painful and difficult time. Those wishing to express their condolences can choose a cancer research group or charity of their choice and make a donation in Neil Peart’s name. Rest in peace, brother.”