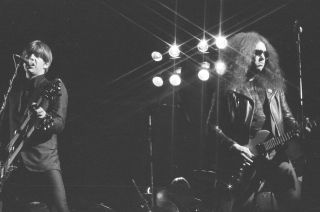 Larry Wallis, the guitarist who appeared on Motörhead's 1979 album, On Parole, has died at the age of 70.

His passing was confirmed on the official Motörhead website.

No official cause of death has been revealed.

Wallis was already something of a British rock music vet by the time he hooked up with Motörhead’s Lemmy Kilmister.

He got his start in 1970 as a member of Shagrat, a band co-founded by former Tyrannosaurus Rex member Steve Peregrin Took, and went on to play with blues rockers Blodwyn Pig and, for a brief period in 1972, a pre-Michael Schenker version of UFO.

Later in 1972 Wallis joined up with psych-rock band the Pink Fairies, appearing on their 1973 album, Kings of Oblivion.

Following the Fairies’ breakup in 1975, Wallis was recruited by former Hawkwind bassist Kilmister for the first lineup of Motörhead alongside drummer Lucas Fox.

Wallis said of their first time playing together, “We plugged in, left the amp settings where they were, as they were already turned with a monkey wrench, and went nuts.”

Though considered a seminal album today, Motorhead’s label at the time, United Artists, was unimpressed and refused to release the recording. No Parole was finally issued in 1979, after Motorhead had found success with albums like Overkill and Bomber.

By this time, Wallis was long out of the band, having left soon after No Parole’s shelving and the hiring of “Fast” Eddie Clarke as a second guitarist.

“The game didn't look as if it was worth the candle,” Wallis recalled. “I wanted another guitarist to flesh it out, but once Eddie Clark came along, it was apparent he would be the man to replace me. He had the enthusiasm that had been eaten away from me by circumstances.”

Post-Motörhead, Wallis played with a reunited Pink Fairies and served as a producer for punk and new wave label Stiff Records. He also recorded a single for Stiff, Police Car/On Parole, which was produced by Nick Lowe.

Wallis continued to record and perform, including another stint with the Pink Fairies, throughout the subsequent decades. His one and only solo album, Death in the Guitarfternoon, was released in 2001.