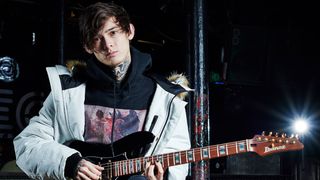 With their fusion of red-hot shred guitar lines and hip-hop-infused rhythms, Polyphia are arguably the most exciting instrumental electric guitar act around - but accordingly to recent comments by the band’s Tim Henson, he’d rather ‘guitar music’ didn’t exist at all.

In a new interview with Total Guitar (which also features Covet’s Yvette Young), Henson reveals that he never listens to music with guitars, instead consuming solely rap.

When asked about the future of guitar music, Henson says, “I see it being less guitar-centered, and more musical. Because I hope that guitar music dies. I want it to die a painful death, because so much of it is just bullshit.

“And I feel like people should focus more on the music itself and use the guitar as a tool to make music versus, like, ‘I’m going to play guitar music,’ you know what I mean? Because so much of it is just not good.”

But before you light up your keyboard with rage, hear us out: Tim’s entire reasoning for his views revolves around keeping the guitar alive - which is a very good thing in our book.

He continues: “I work with a lot of hip-hop producers, and we’ve been writing for some bigger bands - there’s lots of bringing in cooler guitar parts to things that are much bigger than us. So that eventually you’ll turn on the radio again and hear guitar on the radio in whatever hip-hop song is happening - some good guitar, actually.

“So, that way, the future of guitar is cool again. Because I think it just got lost in translation of what was cool in the ’80s when it was super-cool; you look back on it and that shit is dumb-corny. That’s why it’s no longer cool: because it’s literally not.”

Strangely enough, Henson’s comments on ’80s guitarists echo those of Pete Townshend, who recently claimed that today's players have “literally exhausted the possibilities of the guitar”.

Yet, we’d argue that, whatever you think of their views, Polyphia’s fluid genre mash-ups and rabid fanbase prove the Who guitarist very much wrong: there’s plenty more that can be done with the guitar - and music fans of all ages are lapping it up.