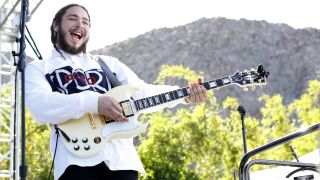 Post Malone may have made his name as a hip-hop/pop star, but we’ve also witnessed him blow the roof off his, well, house, playing a set of Nirvana covers in quarantine (and raising millions for charity in the process).

But taking on Kurt Cobain’s riffs and solos is one thing. Tackling Eric Johnson’s Cliffs of Dover? That’s a whole ’nother slice of the electric guitar pie.

And yet, that’s exactly what Malone has done in a new Instagram post, in which he and his Les Paul play some of the most famous licks from the EJ tune as a sort of “challenge” to Malone’s sometime producer and co-songwriter, Andrew Watt.

Watt, who served as guitarist and producer on Ozzy Osbourne’s Ordinary Man, was clearly game for this guitar battle, posting a response clip in which he ripped his own solo from the Ozzy/Malone duet Take What You Want.

Okay guys, what’s next? Free Bird? Stairway? We await round 2…